More on the plate means more in the tummy
We know that in adults, a larger portion size will mean consuming more calories at that meal. We also know that foods that have more calories per serving (are "energy dense") will often do the same. But is this true for children?

Eating more CAN mean weighing less!
Weight management is a simple mathematical formula: calories in must equal calories out. The simplest advice for weight loss, then, is to eat less. Easy for some people, but for most people simply eating less means feeling hungry and dissatisfied, especially when large portions of high-calorie foods are so widely available. To combat this, organizations such as the American Diabetes Association have recommended that instead of simply eating less of the same foods, they should eat the same amount of foods, but switch to those that are lower in calories.

Proof that You Can Eat Less, Eat Fewer Calories, and Still Be Satisfied
There are two ways to eat fewer calories. One is to eat smaller portions and the other to reduce the amount of calories in a particular dish. With Dr. Gourmet recipes I work at both of these approaches, enhancing the taste and satisfaction of a recipe by choosing lower calorie ingredients that maximize flavor. One example of this is paying careful attention to foods that have a high number of calories by weight. Foods that are calorie dense, like those having higher fat and or sugar content, are one of my first targets when working on a recipe. The other key to eating fewer calories is controlling portion size.

More on the plate means more in the tummy, grownup version 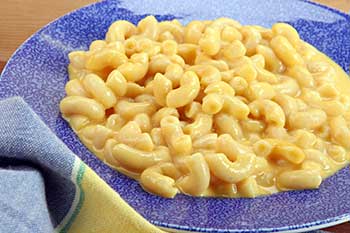 Serve more, eat more: it's clear that larger portion sizes have contributed to the rise in obesity. As we saw back in 2007, this is true for kids, too, who ate 1/3 more food when presented with twice the portion size. One of the ways to combat this is to choose foods that are lower in energy density (that is, have fewer calories for greater volume).

A team from the Laboratory for the Study of Human Ingestive Behavior at The Pennsylvania State University invited 48 adult women, none of whom were trying to lose or gain weight or had food allergies or restrictions, to participate in their attempt to find out (Appetite 2016 99:1-9). On four occasions the participants came to the laboratory and were served a lunch consisting of 3 foods that were lower in energy density (cherry tomatoes, buttered broccoli, and red grapes) and 3 foods that were higher in energy density (Stouffer's macaroni and cheese, angel food cake, and garlic bread). The difference between the four visits to the lab was in the amount of food served: in random order, the participants were served a standard portion of all the foods (100%) or 1 1/3 portion (133%), 1 2/3 portion (167%), or a double portion (200%).

The authors determined the amount by weight that each participant consumed of each food and analyzed what percentage of the amount presented at the meal was consumed. I'm sure you won't be surprised to know that increasing the portion size by 1/3 meant the participants ate about 25% more of the meal overall. On the other hand, when the portion sizes were increased by 2/3, the participants ate an extra 34% - and the same was true for when the portion sizes were doubled. When they looked at the consumption of the lower energy density foods as a group and compared it to the group of higher energy density foods, the women tended to eat the same proportion of each at each meal regardless of the serving size.

What's interesting, though, is that the amount consumed of individual foods did not increase the same amount: between the standard portion and the doubled portion, the participants ate about 22% more mac and cheese but 60% more of the broccoli. In fact, in post-meal interviews the participants indicated which foods were most healthful and which they liked the best - and the authors found that even though the subjects knew that the lower energy density foods were better for them, they did not change the proportion of the lower- vs. higher energy density foods they ate when the servings were larger. Indeed, in general the greatest increases in the amount consumed were in the foods the participants liked the best (I guess people do like broccoli, after all).

Regardless of how much the women ate, they all reported feeling the same level of fullness after each meal. That's a good indication that if you aren't knowingly depriving yourself, you're likely to be just as satisfied with a smaller portion as a larger one. So if you're working on your weight, load up your plate with larger portions of foods that are low in energy density, like vegetables and fruit, and keep a closer eye on the portion sizes of higher energy density foods.