Omega-3 Fatty Acids May Prevent Cellular Aging
While it is natural and normal for cells to die, which is known as "programmed cell death," emerging research posits that the number of telomeres present on certain cells is linked to biological aging, which is different from chronological age in that these telomeres are also affected by genetic and environmental factors.

Live longer (on a cellular level) with a Mediterranean Diet
Today's research article essentially extends that research: making use of data gathered through the Nurses' Health Study (a large-scale, long-term research study), scientists at Harvard assigned Mediterranean Diet scores to the dietary questionnaires of over 4,600 participating women who were considered "healthy controls:" they were free of chronic diseases such as cancer or heart disease.

A healthy diet helps you avoid skin cancer
Cancer is caused by a multitude of factors, but one that we're sure of is cellular damage through oxidation. High levels of sun exposure causes this oxidative damage to skin cells, which can lead to skin cancer. On the other hand, we also know that anti-oxidants in the diet, like vitamins C and E, can help reduce this damage. 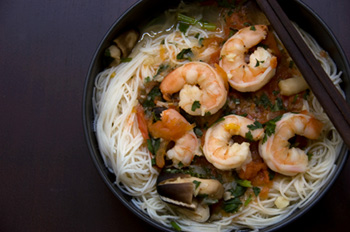 Telomeres are repeating DNA sequences that form a protective cap on certain chromosomes. Each time the chromosome divides to create new cells, the telomeres get shorter and shorter until the chromosome breaks down and the cell dies. This is known as "programmed cell death," a normal process that can, however, be set off prematurely. That premature cell death has been linked to inflammatory states such as cancer, heart disease, and high blood pressure.

Both those studies were done on largely white populations in the United States: the first in over 600 men and the second in the Nurses' Health Study, which focuses on women. Today's research, however, comes from South Korea, where nearly 2,000 Korean men and women participated in a long term study that started in 2001, when the participants were between 40 and 69 years of age (Eur J Clin Nutr 2015;69:1048-1052).

At the start of the study the researchers administered a food frequency questionnaire specifically created and tested to be accurate for Koreans. At that time they also gathered demographic data and health information, including blood tests, height, and weight. Ten years later the participants' blood was drawn and their telomeres were measured.

If you've been following Dr. Gourmet for a while it shouldn't surprise you that even after taking into account such variables as Body Mass Index, smoking status, the amount of physical activity, and whether the participant had high blood pressure, diabetes, or poor cholesterol scores, those who followed the prudent dietary pattern tended to have longer telomeres than those following a Western dietary pattern. What's particularly interesting, however, is what the authors found when they looked at specific food types.

Once again, it will be no surprise that higher intake of legumes, nuts, and fruit were linked to longer telomeres. But so was seaweed, dairy products, and coffee! Even more interesting is that the effects of seaweed and fruit were greater for men, while the effect of coffee was greater for women. On the other hand, greater intake of red or processed meat and sweetened carbonated beverages were most strongly linked to shorter telomeres, with the effects of red or processed meats being slightly stronger for men than women.

These types of studies assume that people tend to have the same dietary pattern for the long term - and this has indeed been shown in corroborating research. That said, people can and do change their diets. The authors acknowledge that this is a possibility and note that their research still shows that one's diet, even ten or more years previously, appears to still have an effect on telomere length. Your take-home should be that a Mediterranean-style diet (which their "prudent dietary pattern" strongly resembles) is one that you can live with long term and will likely keep your telomeres longer, too.