Dr. Tim Says: Portion Size
In the last few decades it has become a major issue with portions in restaurants increasing dramatically. 40 years ago a 32 ounce milk shake with 1,160 calories would have been unusual. There was no such thing as a Quarter Pounder (let alone a Double Quarter Pounder) and getting a mountain of nachos would be rare. These huge plates have spilled over into how we choose food. 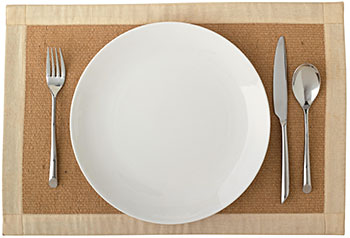 We've seen in other Health & Nutrition Bites that portion sizes have grown in the last several decades - Brian Wansink's assessment of the serving sizes in several editions of The Joy of Cooking is just one of the more interesting. The implication of these and other studies of portion size has been that because people have been exposed to oversized portions so frequently, they are no longer able to correctly assess portion sizes by sight. In short, they're used to larger portion sizes, so they look normal.

In a second, similar study the authors eliminated the household object arm of the study in order to focus solely on the food comparisons. This study used only 55 men and women from the university as well as the surrounding community.

In the final study the authors showed 68 adult female participants photographs of either larger or smaller portion sizes of different brands of crisps (typically these are termed "potato chips" in the United States), then were shown a photograph of a normal size and were asked to evaluate whether a normal serving would be larger, smaller, or the same as the photograph.

The problem I see with the third study is that the participants were evaluating a snack food and not a main course dish. It's quite possible that people's perceptions of what might constitute an appropriate serving size might have little to do with how much they personally would eat. Evaluating spaghetti bolognese would have been a better choice.

The first two studies are much more interesting, suggesting that exposure to various serving sizes might set up a mental norm - and that might affect consumption. Again, if you are working on your weight, you would do well to accustom yourself to standard portion sizes. Here's a guide.