Keep Your Kids Hydrated
Earlier this year I reported on a small study in college students that suggested that mild to moderate dehydration could affect the brain's cognitive functions, including short-term memory, reasoning, and even mood. Indeed, it's been estimated that most adults in Western cultures are chronically mildly dehydrated.

Being Careful with Alcohol
While we know that drinking can be beneficial, it can also cause many health issues. About 2 drinks a day on average for men and 1 per day for women has been shown to be favorable, but binge drinking can cause more health problems than balanced consumption.

Yet another reason to drink water 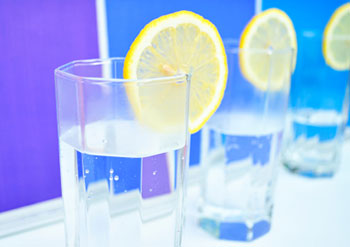 I've shared with you more than one study that looked at the effects of mild dehydration on the brain. One focused on young women and found that just 1 to 3% dehydration could not only affect their reasoning skills and attention span but also make them feel more angry or hostile. Another found that children's short-term memory was better when they were well hydrated.

Today's Health & Nutrition Bite looks more specifically at water's effect on mood. Instead of inducing dehyration (as they did in the first study), or making sure that the participants were well-hydrated (the second), the authors sought to evaluate mood more realistically: by looking at accustomed hydration levels (Appetite 2015;92:81-86).

The team at the University of Connecticut recruited 120 healthy women from the student body to participate in their study. For five consecutive days the women kept detailed records of everything they ate and drank, which allowed the researchers to estimate their total water intake: all of the liquid content of all foods consumed (not just their beverages alone). On those same days the participants responded to a series of mood questionnaires.

The authors analyzed the women's total water intake and grouped the participants into three levels of average daily water intake: Low, Moderate, and High. The Moderate level corresponded to about the daily amount recommended by the Institute of Medicine.

This study's authors did their best to take into account dietary variables that might affect mood. The participants were asked to refrain from drinking alcohol throughout the study, as it not only affects hydration but also is a mood depressor. They also considered protein, carbohydrate, fat, and caffeine intake as well as weekly exercise amounts, none of which appeared to have a role in the participants' moods.

In the published research, the authors do not specify how much of the participants' water intake was from food (soup, for example, or fruits like oranges) as opposed to beverages, nor did they specify how much plain water the participants drank - or even if they did. That said, this is certainly another argument in favor of keeping yourself well-hydrated. Water is best, but tea or coffee, even if caffeinated, are also great for you. Bottom's up!