A DASH-style Diet Reduces Your Risk of Heart Disease
The DASH diet (Dietary Approaches to Stop Hypertension) is a style of eating created by the National Institute of Health to help people control their high blood pressure. Generally speaking, the diet is high in fruits, vegetables, whole grains, nuts and legumes, and it's low in red meat, salt and sugar.

Lean pork vs. chicken and fish in a DASH diet 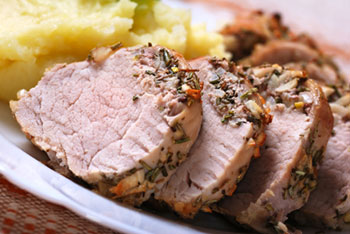 As I said a few weeks ago in my article about red meat for our "How to Eat Healthy" series, "Red meat is not bad for you. Bologna is bad for you."

With today's knowledge that processed meats are much more dangerous to your health than red meat (whether beef, pork, or venison), one can hardly blame the National Pork Board for creating its "Pork. The other white meat" advertising campaign, which started in 1987 and ended in 2011.

The National Pork Board continues to fund research into pork products, as in today's study, published in the American Journal of Clinical Nutrition (2015;102:302-8). The authors recruited 19 clinically obese men and women to participate in a crossover feeding study: an initial 6-week period following one diet was followed by 4 weeks in which they followed their usual diet. Then the participants switched diets and continued for another 6 weeks.

The comparison diets were both DASH-style diets that aimed to provide about 2,500 milligrams of sodium per day and the appropriate amount of calories for the participants to maintain their body weight. The difference was that for one six-week period, the participants consumed the vast majority of their animal protein in the form of chicken and fish; in the other, the main animal protein was pork in the form of pork tenderloin and fresh, uncured, and well-trimmed ham. Both diets permitted the participants to consume 2 servings of lean beef per week.

The most obvious drawback to this study is its funding, but its (tiny) size does not help, either. Regarding the cholesterol results, the authors note that the study was not primarily designed to assess cholesterol changes and note that those results should be interpreted "with caution." The study does, however, support the notion that one need not cut out all red meat in order to eat healthy.