Kids also eat more while watching TV
I wrote not long ago about how distractions such as music during a meal will contribute to adults eating more than they would without music on (News Bite, 11/07/06), and you've probably heard the estimates that children consume about 25% of their daily meals in front of the television. Recently, scientists at the University of Buffalo devised a pair of experiments to see if television viewing affected the amount children ate (Am J Clin Nutr 2007;85(2):355-61).

Kids who cook
A couple of weeks ago we looked at a study that reinforced other research showing that kids will eat more when they are served more (and that larger serving sizes for parents often translate into larger serving sizes for kids). As a strategy to get kids to eat more fruits and vegetables, we've seen that this works pretty well, as does hiding vegetables in other foods and simply serving those veggies with dip (as any parent could tell you: my wife likes to call this "duh science"). 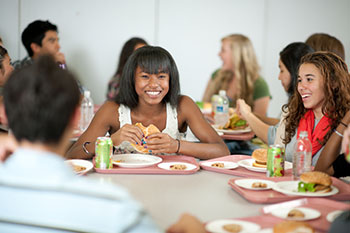 Parents are bombarded with messages about "starting your kids out right," and the areas of diet and exercise are no exception. Not only is it important to make sure your child consumes the right foods to grow a healthy body, teaching them healthy habits, including healthy snacking, early will help them maintain that health for the long term.

But how strong are those early habits, really? It might be surprising to you (it was to me), but there does seem to be some question among researchers regarding whether adolescent behaviors around food rise to the level of habit, as defined by the researchers in today's article: "Habits are formed when people repeatedly engage in the same behavior in the same context" (Appetite 2015;95:182-187).

The distinction here is between simply doing something on a regular basis: "she had a habit of eating popcorn at the movies," and a true habit: "it just wasn't going to the movies without popcorn." Adults know that habits like these can be hard to break, even if they don't involve harmful or physically addictive activities like, say, smoking.

Snacking - what one snacks on and when - often rises to the level of true habit in adults. In today's study the authors noted that an historical rise in the frequency and calorie count of snacking among kids 10-17 is due to an increase in choosing unhealthy snacks like sweets (candy) or savory snacks (potato chips). At that age, are those choices truly habits, with the associated difficulty of breaking those habits?

A survey of over 11,000 students at 121 schools in 9 European countries asked the students how often and on what they snacked and included a previously-established questionnaire regarding the formation of habits. For example, students were asked to rate on a scale of 1 to 5 (with 5 being "strongly agree") whether "unhealthy snacking is something I do frequently" and "unhealthy snacking is something I do without thinking."

Other sections of the survey asked about self-regulation strategies the students might use with respect to eating, ranging from "controlling the food environment directly" (not walking past the vending machine, for example), "changing the meaning of the food environment" (distracting oneself or ignoring the smell of popcorn at a movie theatre) or "addressing the goal to eat healthily" (reminding oneself of the reason to eat more healthfully, such as weight loss or fewer cavities).

Somewhat unsurprisingly, the authors found that choosing unhealthy snacks had already risen to the level of true habit, although the strength of that habit was termed "moderate," on average. On the other hand, the strength of that habit did increase with the students' age. The good news, however, is that the students reported "sometimes" using self-regulation strategies to manage their snacking. Those with a high habit strength who used "controlling the food environment strategies" or "changing the meaning of the food environment" strategies more frequently ate 1 fewer unhealthy snack per day than those with a high habit strength who used the same strategies less often.

Teaching your child good dietary habits isn't just about feeding them healthy meals - it's also about helping them gain the skills to make the right choices even in the face of temptation. These skills aren't limited to food-related issues, however - they're critical to academic and interpersonal success, as well. Talk to your child's pediatrician about resources for helping your child learn self-regulation skills.