Eggs OK for diabetics, too
Sometimes it still seems to be an uphill battle to let people know that for the vast majority of people, dietary cholesterol (the cholesterol in your food) has virtually no effect on your cholesterol scores. Every now and then I still get an Ask Dr. Gourmet question about the cholesterol in a recipe, but the good news is that the word does seem to be getting out that eggs are good for you.

Garlic: tastes great and... just tastes great
I've previously reported on the positive effects of garlic on lowering cholesterol and noted that it's hard to study garlic because of the characteristic smell and flavor. Worse, scientists have a hard time agreeing on what form of garlic to use (fresh? powder? pill?) and which strain of garlic to study.

Improve your cholesterol with soy
I've written before about one of several nutritional studies on soy protein and its effect on LDL cholesterol (the bad stuff) and total cholesterol levels. A recent Canadian study in the American Journal of Clinical Nutrition (2006;83(2):244-51) theorized that isoflavones, a plant chemical with estrogen-like qualities, might be one of the significant factors in soy's association with reduced cholesterol levels. 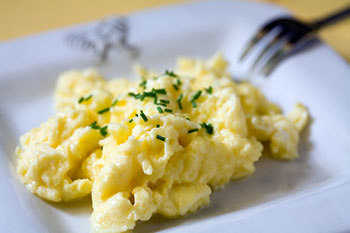 Just a couple of months ago I shared with you a study that looked at the effect of eating eggs on those with diabetes or pre-diabetes. The concern has been that the dietary cholesterol in eggs might lead to increased risk of heart disease or stroke, but the study showed that eating 2 eggs a day had no effect on the participants' risk of either.

While that's good news, there's still some concern that higher egg intake might mean a higher risk of developing type 2 diabetes itself. Studies focused on people here in the United States have yielded mixed results, with some showing increased risk of diabetes with higher egg intake, or no association.

As the authors in today's article point out (Am J Clin Nutr 2015;101:1088-96), those were cross-sectional studies (looking at a single moment in time), or case-control studies, in which (in the case of diet) the dietary habits of those who already have a condition are compared with the diets of those who are otherwise similar in many respects but do not have the condition. Neither type of study is very good at showing whether something is caused by something else, and indeed, it's easy to get that causation backwards (called "reverse causality").

Researchers in Finland performed a prospective study of over 2,300 middle-aged men that lasted over 20 years. At the start of the study the participants filled out a 4-day food recall which included one weekend day. Every four years, from the start of the study onwards, they undertook a glucose-tolerance test as well have having their cholesterol and other blood counts tested.

Unlike the study I reported on a few months ago, this study looked at overall egg intake - not just whether the subjects ate eggs by themselves, but also whether eggs were included in baked goods or mixed dishes. When compared with those who ate less than 1 medium egg per week, on average, those who ate at least 3 1/2 to 4 eggs per week were 37% less likely to develop type 2 diabetes. Eating even more eggs, somewhat surprisingly, did not increase or reduce the risk further.

After analyzing the participants' total cholesterol intake from all sources (not just eggs), they also found no association between dietary cholesterol and diabetes risk.

The authors likely limited their participants to men because women's higher estrogen levels tend to help them maintain better blood cholesterol scores, and that could affect the possible link between cholesterol and diabetes that the scientists were trying to evaluate. Generalizing these results to all persons, male and female, should then be done with some caution. That said, if you're otherwise healthy, the cholesterol in eggs is by itself unlikely to have an effect on your risk of heart disease, stroke, or diabetes. Once again: moderation is key.