An egg a day may help you keep your eyesight
About 5% of people 65 or older suffer from Age-related Macular Degeneration (AMD), a disease which affects the part of the eye responsible for the sharpest central vision. One type of AMD has been associated with reduced blood levels of two antioxidants, carotenoids known as lutein and zeaxanthin. Chicken yolks provide a source of these carotenoids that is even more readily absorbed by the human body than lutein supplements or spinach, yet there is some concern that intake of additional chicken eggs might raise one's serum cholesterol levels.

Eggs OK for Diabetics, Too 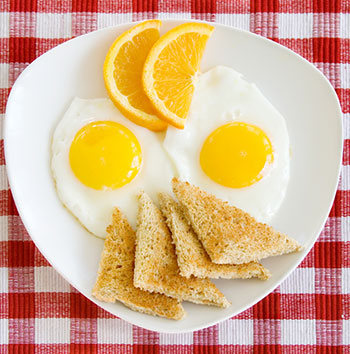 Sometimes it still seems to be an uphill battle to let people know that for the vast majority of people, dietary cholesterol (the cholesterol in your food) has virtually no effect on your cholesterol scores. Every now and then I still get an Ask Dr. Gourmet question about the cholesterol in a recipe, but the good news is that the word does seem to be getting out that eggs are good for you. That said, there's been lingering concern about eggs increasing the risk of heart disease or stroke in diabetics (JAMA 1999;281(15):1387-1394), so those with diabetes or pre-diabetes are often told to limit their egg consumption.

As always, it's great to be able to report on a study that looks at the issue directly. A team in Australia recruited 121 overweight or obese men and women who had been diagnosed with diabetes or pre-diabetes to participate in a three-month dietary study known as DIABEGG (Diabetes and Egg) (Am J Clin Nutr 2015;101:705-13). Half were assigned to a "High Egg group" and half were assigned to a "Low Egg group." Those in the High Egg group were instructed to eat 2 eggs per day at breakfast, while those in the Low Egg group were told to eat no more than 2 eggs per week, while having 10 grams of lean animal protein (beef, chicken, or fish) at breakfast.

Even better, those in the High Egg group reported being happier with the variety of food choices in their diet as well as feeling more satisfied after meals.

It's pretty clear that in the context of an overall healthy diet, you can eat eggs even if you are diabetic or pre-diabetic. Don't douse them in butter, but by all means scramble or fry them for breakfast using a spray of olive oil instead. Eating eggs may even help you lose more weight, if that is your goal.