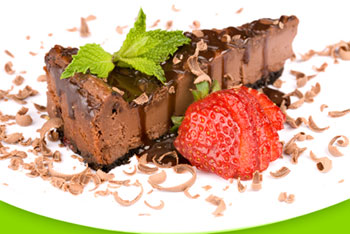 As I've noted in the past, medicine is not like algebra, where if A = B and B = C, then A = C. So if a food contains an ingredient, and that ingredient has been linked with a certain positive or negative effect, it does not necessarily follow that the food will also have that effect. (Boy, it would be great if it did!) In medicine, it's critical to connect those dots with specific research.

Chocolate is a case in point. Cocoa, from which chocolate is made, is high in flavonoids (an antioxidant) and contains both caffeine and magnesium. All three of those ingredients have been separately linked to a reduced risk of diabetes, while cocoa and chocolate have been linked with reduced oxidative stress, inflammation, and insulin resistance - all three of which are associated with diabetes.

A team of researchers from Harvard Medical School and Tokyo Medical University in Japan sought to connect the dots between cocoa, chocolate, and diabetes (Am J Clin Nutr 2015;101:362-7). The made use of data collected through The Physician's Health Study I and The Physician's Health Study II, two long-term, large-scale observational studies that followed a total of ~37,000 male physicians for as many as 32 years. The data gathered through those studies included yearly dietary questionnaires as well as information regarding health, physical activity, demographic information, and height/weight.

The researchers were able to determine which participants developed diabetes over the course of the study and compare the reported chocolate intake of those participants with that of those who did not develop diabetes.

After taking into account such factors as age, Body Mass Index, level of exercise, and intakes of certain foods (including whole grains and nuts), the researchers initially found an inverse relationship between chocolate intake and risk of developing diabetes: those who ate more chocolate were less likely to develop diabetes. Upon closer analysis of different subgroups of the participants, however, they found that only those men who were under 65 and of clinically normal Body Mass Index actually enjoyed this reduced risk: the effect disappeared for those who were overweight or over 65.

This is a good example of needing to use caution in interpreting the results of research. Observational studies like these don't prove that one thing causes another - they show that when one thing happens, another thing also happens a certain percentage of the time. In this study, those who were younger and of normal weight were less likely to develop diabetes - and that's not surprising, statistically speaking, regardless of how much chocolate they might have reported eating. The other problem is that it was impossible to tell what kind of chocolate the participants ate. Dark chocolate? Milk chocolate? Chocolate with nuts? Chocolate spreads like Nutella? This study is interesting and adds to our knowledge that cocoa is good for you, but it's not conclusive. Sorry, chocolate lovers.