Breastfeeding: Developing a Future Gourmet
In other articles we have covered how breastmilk is excellent nutrition for your baby but this site isn't only about nutrition. It is about food that tastes great! Babies, like their parents, appreciate wonderful flavors. Breastmilk provides a variety of flavors that may influence baby's palate for years to come.

Overweight children often remain overweight
Childhood obesity has nearly tripled since the 1970's, yet there are no clear guidelines to help pediatricians identify which children are at risk of obesity and when. Using growth data from the National Institute of Child Health and Human Development, researchers from six locations around the United States tried to identify one of the early signs of adolescent obesity (J Pediatrics 2006;118(2):594-601).

Kids need snack guidance
It probably won't surprise you that kids between 3 and 16 tend to prefer sweet and fatty foods, and parents know that smaller children often prefer familiar foods that they like and are resistant to new foods. That said, left to their own devices children usually will eat about the number of calories they require. 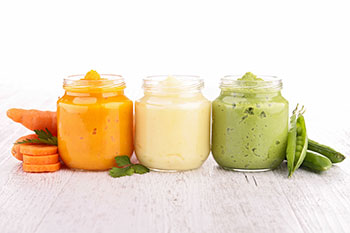 Good parents know how important it is to help their child develop healthy eating habits early in order to set them up for a healthier, longer life. This is also the time to influence their palate so that they don't develop a preference for overly salty or sugary foods, which can lead to overweight even in childhood. Indeed, almost 1 in 4 American children between the age of 2 and 5 are overweight or obese - and we know that overweight kids often become overweight adults.

At preschool age mealtimes can be a bit of a challenge, when this might mean making one meal for your child and one for yourself, but at least when they're infants and toddlers it's a little easier: just make healthy choices from the wide range of ready-made infant and toddler foods. They're created specifically for their growing bodies, so they must be healthy. Right?

You might want to start reading those labels carefully. Researchers at the CDC analyzed the nutrition information for nearly 1,100 foods labeled for infants or toddlers to assess their sodium (salt) levels and whether they contained added sugars (Pediatrics 2015;135(3):early release). For the purposes of their research, they defined a food as high in sodium according to the Institute of Medicine guidelines for children ages 1 to 3 years, resulting in a food being called "low sodium" with no more than 140 milligrams of sodium per child-sized serving. "High sodium" was defined as over 210 milligrams of sodium per serving.

High sugar content was defined as over 35% of calories from sugar - the same as the federal Nutrition Standards for Food in Schools. Further, they were careful to note those foods with at least one instance of sugar in its various forms appearing in the ingredients list.

The good news is that the vast majority of those foods marketed for infants (defined as 12 months old or younger) were determined to be low in sodium. On the other hand, over half of the ready-to-serve mixed grains and fruits contained at least one added sugar ingredient and 44% had over 35% of their calories from sugar.

The good news is that foods marketed as being for infants are generally low in sodium and added sugars, and the bad news is that the amount of sugar and salt in dry fruit-based snacks and breakfast pastries have about as much sugar and sodium in them as the foods marketed as being for adults. Parents will need to read nutrition information carefully when choosing meals for their toddlers. Look for foods that are no more than 210mg sodium per serving, and ideally under 140mg/serving. Avoid or minimize foods that have a sugar in the first four ingredients (variations include: sugar, sweetener, syrup, corn syrup, high fructose corn syrup, honey, fructose, malt, maltose, molasses, dextrose, glucose, lactose, sucrose, turbinado, and trehalose). Certainly foods such as fruit purees will have a fair amount of sugar in them because fruits are naturally higher in sugar. Look for no added sugar varieties.