In praise of brown rice
I was talking about rice with a chef friend recently and the subject of how much I like risotto came up. This led to the discussion of white rice vs. brown rice and the health benefits of the latter. I had mentioned that the one place that I still use white rice is in risottos.

More Brown, Less White
White rice is essentially brown rice that has been processed to remove the outer bran and germ parts of the rice. This is why brown rice is considered a "whole grain" and white rice is not. There's a lot of research showing that eating more whole grains can help you reduce your risk of diabetes, high blood pressure and overweight.

Should you be concerned about arsenic in rice? 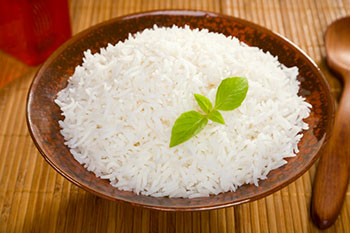 In May of last year I wrote an article entitled "In Praise of Brown Rice," explaining that one of the few places I still use white rice is in risottos. A chef friend told me about brown arborio rice, and I tried it in one of my risotto dishes, finding that it does take a lot longer to cook, but you do still get the same creaminess of white arborio while getting the extra fiber and nutrients from brown rice.

Not long afterwards a reader sent me a link to a New York Times article about the levels of arsenic in rice and asked, "Given that brown rice contains higher levels of arsenic than white, do you consider it safe?" The article she referred to actually covers the relative risks fairly well: as with mercury in fish, the recommendation is to eat a variety of grains and not limit yourself to just brown rice or just white rice. Today's Health & Nutrition Bite addresses the question of rice and arsenic exposure, although somewhat indirectly (Am J Clin Nutr 2015;101:164-72).

A team of researchers at Harvard noted that chronic exposure to low levels of inorganic arsenic (the type readily absorbed from water by rice plants) has been linked to increased risk of vascular and cardiovascular diseases. Through analyzing the data gathered through three long-term, large-scale studies that include both dietary information and health outcomes, they were able to assess the impact of arsenic intake from rice consumption on the risk of heart disease.

The three studies in question are well known: the Nurses' Health Study (including over 70,000 women), the Nurses' Healthy Study II (over 90,000 women), and the Health Professionals Follow-Up Study (over 40,000 men). Using the food frequency data gathered through all three studies, the researchers were able to assign scores for 9 increasing levels of white rice and brown rice intake, along with assessing the individual's overall diet (to estimate other dietary sources of arsenic). Further, they were able to use demographic data to link each participant with the amount of arsenic in the groundwater where they lived.

The researchers compared the rice consumption of study participants who experienced stroke, heart attack, or fatal coronary artery disease with that of those participants who did not, taking into account such variables as overall diet quality, sex, ethnicity, family history, Body Mass Index, smoking status, and other risk factors.

Before you panic and banish rice from your diet forever, keep in mind that those increased numbers are for 5 or more servings of brown rice per week - an amount few Americans will match (even I don't). Further, the amount of arsenic in a given plate of rice, brown or white, can vary considerably depending on where the rice was grown, how it was irrigated, and even how it is cooked.

Finally, the authors of this study noted after analyzing the overall diets of the participants that rice intake accounted for no more than 15% of the participants' total arsenic intake. In my opinion and that of the authors of this study, the benefits of brown rice far outweigh the risks at the levels that most Americans consume it. Your best bet, as with the risks associated with mercury in fish, is to consume a variety of grains and not limit yourself to just one.