10 Things You Need to Know About Health Claims on Food Labels
The FDA allows health claims to be made on foods, but the assertion does have to meet certain criteria. Here's what you need to know.

Dieting and Osteoporosis
It should be common knowledge by now that constant dieting and yo-yo dieting are poor concepts to live by. Importantly, a study by the USDA's agricultural Research Service(ARS) recently (April, 1999) showed that women who ate simply to avoid weight gain had an increased risk for osteoporosis. Osteoporosis is a condition of bone mass loss that eventually results in fractures.

Live longer (on a cellular level) with a Mediterranean Diet 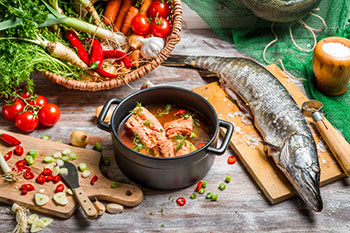 Back in 2011 I wrote an article about telomeres and omega-3 fatty acids. I described telomeres in this way:

While it is natural and normal for cells to die, which is known as "programmed cell death," emerging research posits that the number of telomeres present on certain cells is linked to biological aging, which is different from chronological age in that these telomeres are also affected by genetic and environmental factors. These negative factors can accelerate cellular death, and premature cellular death is linked to inflammatory states such as high blood pressure, heart disease and cancer.

The article linked blood levels of fish- or shellfish-sourced omega-3 fatty acids with the length of the participants' telomeres, showing that more omega-3s meant longer telomeres. Today's research article essentially extends that research: making use of data gathered through the Nurses' Health Study (a large-scale, long-term research study), scientists at Harvard assigned Mediterranean Diet scores to the dietary questionnaires of over 4,600 participating women who were considered "healthy controls:" they were free of chronic diseases such as cancer or heart disease. These women had also provided blood samples which had previously been used to measure telomere length (BMJ 2014;349:g6674 doi:10.1136/bmj.g6674).

If you've been reading Dr. Gourmet for a while, it won't surprise you to find out that even after taking into account the women's age, Body Mass Index, smoking status, and other variables, those women with the highest Mediterranean Diet scores had the longest telomeres, suggesting that they were aging more slowly (on a cellular level).

Another result I found interesting, however, was that when the researchers looked at each component of a Mediterranean Diet score individually, they could find no single item that was significantly associated with telomere length.

The researchers also classified the women's dietary scores into other dietary patterns. These included a "prudent dietary pattern" of "high intakes of fruits, vegetables, legumes, fish and other seafood, poultry, and whole grains," and a Western dietary pattern that included "high intakes of red and processed meats, butter, high fat dairy products, eggs, sweets and desserts, French fries, and refined grains." (I do love that French fries were mentioned specifically as being part of a Western diet!) Neither of these patterns could be associated with telomere length.

So what is the difference between a "prudent dietary pattern" and a Mediterranean-style diet? It's unclear from the article, but a Mediterranean Diet includes moderate alcohol intake (particularly wine taken at meals) and a higher ratio of monounsaturated fats to saturated fats (for example, using olive oil in place of butter for cooking), to name just two components that are not specifically mentioned in their description of a "prudent dietary pattern." The take-home message here is that it's not any one (or even any three, four, or five) components of a Mediterranean diet that is linked with slower cellular aging: it's the pattern as a whole. Find out about the nine components of a Mediterranean Diet and get tips for improving your score.