How to plan your weekly menus
People will plan almost every aspect of their lives. They know when they have to be at work, what meetings they will go to, times for the kid's soccer game, when they are going to mow the lawn and on and on. Any successful project requires a plan.

How to Eat Healthy Alone
Eating by yourself and eating healthy can be a challenge. There are a few considerations and first and foremost is that there's no one to share the shopping, cooking and cleaning up. With couples and families often one person will cook and the other clean up. Or sometimes people will switch off making different meals on chosen days. With a larger group of 4 or 5 in a family it can be easier to cook because most recipes are scaled for two or more.

Eating Well and Eating Healthy On The Road
Patients will often tell me that they can't eat healthy when traveling. This comes from people who only travel occasionally for pleasure as well as those who make a living on the road. Just as with eating at home, planning is the key to eating healthy on the road. Thinking about what and when you are going to eat beforehand makes all the difference.

Cut calories by planning ahead 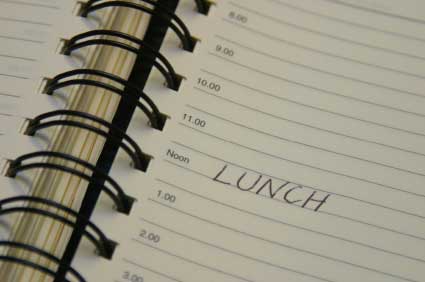 When patients ask me to help them to lose weight, one of the first things I do is ask them what they eat for breakfast and lunch. Unfortunately, the vast majority of them do not take their lunch to work, but instead go out and buy their lunch. They might go to the cafeteria in their building or the Subway down the block - or they might go to a sit down restaurant. The point is that they don't know what they're going to have for lunch, and too often that means choosing their lunch by looking at a menu (or through the counter glass) and choosing the first thing that looks good. And that, as you probably know, is unlikely to be the healthiest choice you could be making.

These days many businesses are looking for ways to help their employees be healthier - and not just by offering discounts for gym memberships. Researchers at the Center for Urban Health Policy partnered with the Health and Wellness department of Einstein Healthcare Network in Pennsylvania to find ways to help people make healthier choices at lunchtime (Appetite 2014;84:88-97). They recruited participants for a pilot study from the staff at a large urban hospital in Philadelphia that had an employee cafeteria where many of the staff were accustomed to having their lunch. The 26 participants were all overweight or obese, willing to eat at least three times per week in the hospital cafeteria, and also willing to allow the researchers to collect data about their lunch purchases from the cafeteria.

The researchers theorized that ordering one's lunch in advance - at least 45 minutes before picking it up from the cafeteria - might lead to eating fewer calories at lunch. They worked with the cafeteria food provider, Aramark, to create an online ordering tool, complete with nutrition information for each food (which was not available at the physical cafeteria) that would allow participants to choose their lunch each day from the current day's offerings. The single requirement was that the order must be placed at least 45 minutes in advance of pickup.

After an initial four to eight weeks of monitoring the participants' usual purchases at the cafeteria, the researchers provided the participants with mindful eating training, which includes strategies to help avoid emotional eating and being more present and less distracted (by television or other media, for example) while actually eating.

For the following four weeks the participants were provided with discount coupons to encourage their use of the system, then for an additional four weeks they were encouraged to continue using the system without the coupons.

After the full 8 weeks, the researchers could compare the participants' usual average caloric intake with the selections they made using the advance ordering tool. They found that on average, when the participants were using coupons, they ordered about 70 fewer calories than they usually would. When they were NOT using coupons, however, they reduced their average number of lunch calories by about 115 calories. Similarly, they reduced their fat intake by as much as 5 grams of fat.

Note that the participants were not given instruction in nutrition and that the mindfulness training has nothing to do with being mindful of caloric intake. Simply being able to make their lunch choices in advance of lunch time led the participants to choose foods with fewer calories and less fat than they would otherwise. Overall, the participants lost about 1 pound apiece - not a significant amount, to be sure, but this was done unintentionally. Imagine what this advance planning could do if you were consciously trying to lose weight!