Are artificial sweeteners as bad for you as they say?
Equal, Splenda, Sweet N Lo, Truvia and their generic equivalents… how bad are they really? Is drinking a can of diet soda or adding a packet of Truvia to your tea really a health issue? I know the debate rages on, but I'd like to get a sensible opinion.

Soda and Stroke
Did you know that as of 2009, the average American drinks over 45 GALLONS of carbonated beverages, both sugar-sweetened and non-caloric, per year? It's the single largest source of added sugar in our diet. 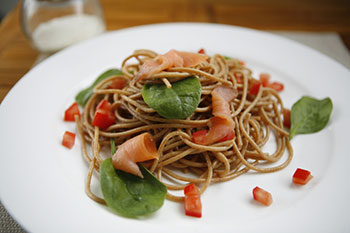 Back in 2006 I wrote about a professor I had in medical school who said, "I don't care about my diet, I'll just take Zocor or another cholesterol lowering medication and keep eating my thick, juicy steaks." He believed that taking medication was just as good as eating healthy. We now know that 1. eating a steak is not as bad for you as he apparently thought (here's some guidance on the role of meat in the Mediterranean Diet.), and 2. that adopting a Mediterranean-style diet can improve your cholesterol enormously.

But what if you're already on a cholesterol-lowering medication? Should you make the effort to improve your diet? Today's research article says you should - and that your effort could be focused in just one area: whole grains.

The authors, based at Tufts University, made use of data collected through the NHANES (National Health and Nutrition Examination Survey) 2003-2006, which is a large-scale survey of American adults' health and nutrition status (Am J Clin Nutr 2014;100:1149–57). The researchers focused their analysis on those men and women over the age of 45 with complete dietary and demographic information that included medication usage and cholesterol profiles. After excluding those who were taking cholesterol-lowering medications that were not statins (a class of medications that include such brand name drugs as Lovacor®, Zocor®, and Pravachol®), they were left with nearly 4,300 people.

Using the dietary recalls completed for the study, the researchers were able to estimate the amount of whole grains each person consumed on a daily basis, on average. They could then group those persons according to whether they consumed more than or less than 16 grams of whole grains per day - about a single serving.

About 1/2 cup cooked brown rice or a single slice of whole grain bread contain about 16 grams of whole grains each, or one serving. That's not very much at all. If you've been prescribed cholesterol-lowering medication, take your medicine as prescribed and switch at least one serving of the grains you eat to whole grains. Here's a guide to making better fiber choices that will help you increase your intake of whole grains.