Fast Food Restaurants Contribute to Overweight
I know that the headline to this week's Bite probably isn't news to you. Sure, too much fast food makes you fat. As a whole, fast foods tend to be calorie-dense, high in sodium and fat, and low in fiber: of course eating frequently at fast food restaurants is likely to make you fat. Researchers at the University of Pennsylvania have taken the "fast food makes you fat" rule of thumb one step further - by looking at the number and types of restaurants in a geographic area and the people who live there (Am J Prev Med 2008; 34(2):127-133).

Quantifying the Effects of Less Salt
I have said in the past that the typical American eats over 6000 milligrams (or 6 GRAMS) of sodium per day. A recent article in the New England Journal of Medicine(2010;362:590-9) means I'm going to have to update that figure: the latest estimates, for 2005-2006, estimate that every adult male in the United States eats an average of 10.4 grams of salt per day. Women, on the other hand, only eat a more modest (and I use that term facetiously) amount of 7.3 grams per day. 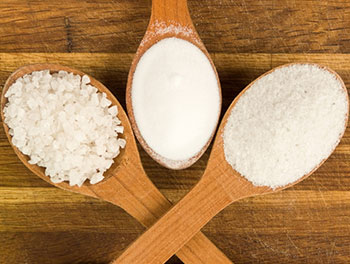 Here at Dr. Gourmet we try to report on research that's applicable to your daily life. That's why our Health & Nutrition Bites always end with "What this means for you:" we report on research that's strong enough, whether standing alone or taken together with other research, to warrant making some sort of change to the way you eat or live. That's also why we don't report on research done in vitro (performed in a test tube) or on rats or other animals: while such studies are often of very high quality in terms of their design and the results drawn, the fact remains that people are not test tubes. Nor are they rats.

We do, however, report on what is known as "cross-sectional studies," which look at the characteristics of a group of people at a particular point in time, rather than following that group over the course of days, weeks, or longer, which are known as "prospective studies." The conclusions drawn from these cross-sectional studies are not as strong as those from prospective studies, most often because it's very difficult to tell from a single point in time whether Item A caused Item B - or if the reverse is true and Item B caused Item A. That said, these studies are useful for suggesting new associations for scientists to explore in the future.

Today's article is just such a cross-sectional study. Researchers in New York City made use of data collected through The New York City Heart Follow-Up Study which was designed to look at sodium intake in a representative sample of over 1,500 adult New Yorkers (Am J Prev Med 2014;46(6):e53-e55). Along with having their Body Mass Index, Waist Circumference, and weight measured at their homes, participants responded to a dietary questionnaire and collected their urine output for 24 hours so that the researchers could accurately measure both sodium and potassium intake.

They could then correlate each participant's sodium intake with their intake of sugar-sweetened beverages, their caloric intake (using the individual's potassium intake as an indicator of their caloric intake), and their BMI and Waist Circumference. They found that if for every increase of 1,000 milligrams of sodium per day in an individual's diet, they were about 26% more likely to be obese. After controlling for potassium intake, however, the association was no longer statistically significant for men, although it continued to be significant for women.

Not much, really, because of the causality issue I mentioned above: we can't know from this study whether sodium intake causes obesity or if the obesity they observed was caused by something else (say, a diet higher in fast food) that happened to also be higher in sodium. It does suggest that more prospective research should be done to see what, if any, connection there might be between sodium intake and weight that is independent of the number of calories a person consumes. What I take away from this is that a healthier diet tends to be lower in sodium, and a healthier diet helps you maintain a healthier weight. But we knew that.