Perception Matters
I was giving a talk the other night and as part of it there was a discussion of how the perceptions of what we eat can guide our consumption. One of my favorite researchers, Brian Wansink, has published numerous studies showing that how we think about food influences what we eat. His work has both the ability to help us understand how we look at food but also to laugh at ourselves a bit over how easily we can be duped by our perceptions.

Size Does Matter
Many diet plans and diet books for years have recommended using small plates to make it look like you are eating more. This concept was put to the test by two researchers, Brian Wansink and Matthew Cheney. In a research letter published by the Journal of the American Medical Association they showed that the size of serving bowls makes a difference on the amount people eat.

Non-celiac gluten sensitivity:
does it exist? 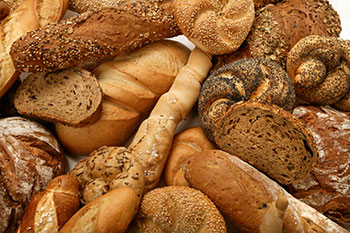 Today's research is not the research performed by that team (although we'll be covering some of their research in future Bites). It does, however, come to the same conclusion: that non-celiac gluten-sensitivity does not appear to exist when tested for under controlled conditions.

For their research, a team in Australia performed two studies: first, a double-blinded, placebo-controlled, crossover dietary trial, then an additional, briefer trial between 8 and 17 months later (Gastroenterology 2013;145(2):320-328).

Thirty-seven men and women with clinically verfied Irritable Bowel Syndrome (IBS) who reported that their symptoms improved on a Gluten-Free Diet (GFD) were recruited from area dietitians, gastroenterologists, or advertisements. They were verified to be free of celiac disease through testing for the genetic marker of the disease or by the usual standard testing of the small intestine.

The researchers educated the participants about FODMAPs, which are known triggers of gut symptoms similar to those experienced by people with celiac disease. (FODMAP stands for Fermentable, Oligo-, Di-, Monosaccharides, and Polyols, which are short-chain carbohydrates that are poorly absorbed in the gut.) After an initial one-week period where the participants continued their usual gluten-free diet, all of the subjects were supplied with a low-FODMAP diet for two weeks. Each participant was then randomly assigned to receive one of three supplements for a week: a high-gluten supplement, a low-gluten supplement, or a placebo, all of which contained the same amount of proteins. After one week on one type of supplement, the subject switched back to the basic FODMAP diet for two weeks. This was repeated three times until all of the participants had spent one week on all three of the diets.

The subjects kept careful daily records of their levels of fatigue and any intestinal trouble they might have. They were also subjected to regular blood tests for markers of gluten antibodies, and they supplied fecal samples for testing as well.

For the second study - the rechallenge study - 22 of the original repeated the study with the test diets lasting only 3 days each, with a one-week period between each 3-day test. Again they kept careful fatigue and symptom diaries and followed a gluten-free FODMAP diet other than the supplements provided by the researchers, but their blood and stool was not tested. For this study the researchers took the additional step of restricting dairy products and other food additives suspected of triggering similar symptoms.

They did not. In the first study all of the participants experienced improvement in their symptoms in the second week of the initial FODMAP diet period. Then, regardless of which diet they were on, their overall symptoms and pain worsened during the third week of each diet. Bloating and tiredness, the researchers reported, actually worsened only during the low-gluten and placebo diet periods.

The rechallenge trial fared about the same: symptoms worsened about the same amount during the three-day diet periods regardless of what supplement the participants received. One would also expect that the same participants would experience similar symptoms each time they were presented with one of the levels of supplementation, but they did not.The researchers were unable to correlate the participant's change in symptoms with any other variable combination they considered, from age and Body Mass Index to how long they had been on a Gluten-Free Diet prior to the studies or even their gene marker type.

The researchers concluded that there was "no evidence of specific or dose-dependent effects of gluten on patients with NCGS placed on a low FODMAP diet."

If you are experiencing abdominal symptoms and consider yourself to have NCGS, consult with your physician about trying a low FODMAP diet instead. Here are resources from the original researchers into FODMAPs.