Perception Matters
I was giving a talk the other night and as part of it there was a discussion of how the perceptions of what we eat can guide our consumption. One of my favorite researchers, Brian Wansink, has published numerous studies showing that how we think about food influences what we eat. His work has both the ability to help us understand how we look at food but also to laugh at ourselves a bit over how easily we can be duped by our perceptions.

Size Does Matter
Many diet plans and diet books for years have recommended using small plates to make it look like you are eating more. This concept was put to the test by two researchers, Brian Wansink and Matthew Cheney. In a research letter published by the Journal of the American Medical Association they showed that the size of serving bowls makes a difference on the amount people eat.

Don't let the brand fool you 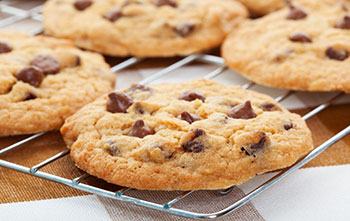 Back in 2009 I shared with you a study which showed that if people think a cookie is healthy, they'll eat more of them. A lot more of them - about 35% more on average.

This healthy "halo effect" isn't limited to the description of the food, as you might guess. The food's brand carries an effect, as well. Researchers in the Psychology department at The College of William & Mary have just published a study in the journal Appetite (2014;82:1-7) looking at the interaction between brand perception, calorie information, and the individual's intake of a snack food.

188 undergraduate women (aged between 18 and 26) participated in the researchers' feeding study. The snack item the psychologists selected to use for the study was an oatmeal chocolate-chip cookie, chosen deliberately because of its combination of healthfulness (the oatmeal) and unhealthfulness (the chocolate chips).

Each participant was told that the purpose of the study was to "examine taste-perceptions in snack foods popular among college students." They were each given three of the cookies along with a taste test questionnaire labeled with a snack food brand and instructed to eat as many of the cookies as they wished while filling out the questionnaire. The researchers had previously assigned each participant to one of two groups: a Kashi® group or a Nabisco® group. The reasoning here was that Kashi® is associated with healthier foods, while Nabisco® is associated with unhealthy foods (the participants were also read a brief script describing each brand in that way). The two groups were then further separated into three groups: one group's questionnaire included a calorie count per cookie of 130 calories per cookie; a second group's questionnaire included a calorie count of 260 calories per cookie; and a third group's questionnaire included no calorie information (just the brand of the cookie).

The researchers theorize that while unrestrained eaters might have been more concerned about eating healthier cookies (given that they ate more of them), restrained eaters might have mentally justified to themselves eating more of the lower-calorie unhealthful cookies because they were lower calorie. If you're watching your weight, bear in mind that while making healthier choices is part of an overall healthy lifestyle, that doesn't mean that you can eat unlimited amounts of healthy foods. The total number of calories in what you eat matters as well.