How to Get Kids to Eat More Vegetables
As I noted last week, small children won't eat what they don't like, and vegetables are at the top of the list of things that small children don't like and won't eat. So it's probably no surprise that children don't get enough vegetables in their diet. As we found in last week's Health and Nutrition Bite, kids tend to eat about the same amount of food by weight, regardless of its caloric density (number of calories contained by weight).

Preschoolers eat more veggies with dip
Parents, you know how hard it can sometimes be to get your preschooler to eat vegetables. One study estimates that they average as little as 1/2 serving or less per day! Even using a combination of strategies like repeated tastings, peer influence, and pairing new flavors with familiar ones can come up (nearly) empty when it comes to eating more vegetables.

Overweight children often remain overweight
Childhood obesity has nearly tripled since the 1970's, yet there are no clear guidelines to help pediatricians identify which children are at risk of obesity and when. Using growth data from the National Institute of Child Health and Human Development, researchers from six locations around the United States tried to identify one of the early signs of adolescent obesity. 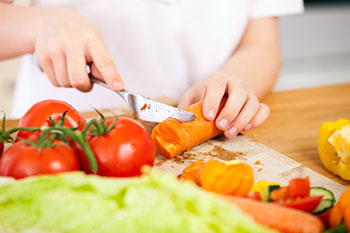 A couple of weeks ago we looked at a study that reinforced other research showing that kids will eat more when they are served more (and that larger serving sizes for parents often translate into larger serving sizes for kids). As a strategy to get kids to eat more fruits and vegetables, we've seen that this works pretty well, as does hiding vegetables in other foods and simply serving those veggies with dip (as any parent could tell you: my wife likes to call this "duh science").

Another strategy that appears to work fairly well is involving the child in cooking the meal. Certainly we know that school gardening programs can help improve kids' intake of fruits and vegetables, but these are part of a multi-faceted program that includes gardening and nutrition education along with hands on cooking. Further, these programs take place at school - without every child's parent(s) involved.

Food researchers in Switzerland decided to focus on improving vegetable intake in a study involving children between the ages of 6 and 10 and one of their parents (Appetite 2014;79:18-24). Forty-seven parent-child pairs who did not typically cook together were invited to the food lab - each pair individually - to participate in a lunch preparation study. With recipes for breaded chicken strips, pasta, cauliflower, and a side salad, half of the parents did all of the preparation of a lunch meal while their child was present in the test kitchen with them, occupied with an age-appropriate activity such as coloring, playing with Legos, or reading.

The other half of the parents merely assisted the child as the child did those cooking tasks appropriate to their age. These included breading the chicken strips, cutting the cauliflower for cooking, weighing the pasta, and choosing (and cutting up) the ingredients for the salad from three options.

After cooking the meal, the parent and child pairs ate the lunch meal together. Each parent and each child were served standard amounts of the food they had prepared, and what was left uneaten was weighed afterwards so that the researchers could calculate the weight and calories of the consumed meal.

As you might have guessed, those children who participated in cooking the meal tended to consume more calories overall - and they said that they liked the meal more than their counterparts whose parents had done all the cooking. While both the chicken strips and the salad were the components of the meal whose intake increased the most, the salad's increase was by far the greater. In fact, the younger children (ages 6-8) ate about 75% more salad when they made it themselves than the children whose parents had made the salad.

This is another small study that points towards several different avenues for follow-up, but its outcome is certainly consistent with existing research (not to mention the experience of many parents I know). Involving your child in the cooking of the meal seems likely to dispose them to eat more. I would add that allowing the child to choose the components of the salad (or vegetable dish) for themselves from a limited set of options is likely part of the increase in the child's intake. Again, parents know that giving a child the option to choose from acceptable alternatives is more likely to result in the child's acceptance and compliance - whether that's food or what to wear to school. Get your child involved in eating healthy and your whole family will benefit.