One Way to Resist Cravings
Most people have cravings of some kind, whether it be for an addictive substance like alcohol or cigarettes, or for something benign, like chocolate or french fries. Most find cravings to be mild and momentary, but sometimes cravings can be a real problem: people trying to lose weight can have cravings just as strong as those struggling with alcohol dependence.

How much television do your kids watch?
A recent study from the University of Missouri followed 8,000 children from kindergarten through third grade (J Am Diet Assoc 2007;107(1):53-61). The children were participants in the Early Childhood Longitudinal Study - Kindergarten Cohort, a sample of children from schools nationwide who entered kindergarten in 1989. About 48% were boys, 52% girls. 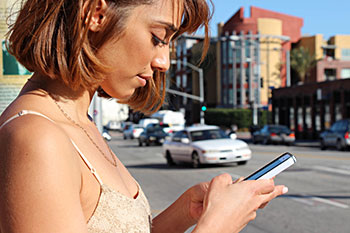 Smart phones seem to be more and more common, even in school age children. And they don't appear to be limited to those children whose families are in the higher income brackets: those who are minorities or are in lower income brackets are just as likely to have a smart phone as their peers. With childhood obesity a major concern, researchers are investigating ways to make use of that ubiquitous technology to help treat or prevent obesity in children.

In a recent issue of the American Journal of Preventive Medicine (2014;46(4):404-408), a team of researchers in Kansas City, Kansas, and Kansas City, Missouri reported on a pilot study they performed to see if a mobile application like those used on smart phones could help improve adolescents' intake of fruits and vegetables, reduce their intake of sugar-sweetened beverages, and reduce their "screen time," or time in front of a computer or television.

Forty-four girls between the ages of 9 and 14, of racial or ethnic minorities, were recruited through afterschool programs in economically disadvantaged neighborhoods. Through three four-week modules, the study focused on fruits and vegetables (weeks 1-4); sugar-sweetened beverages (weeks 5-8); and screen time (weeks 9-12).

Half were provided with a handheld computer, about the same size as a smart phone but without typical smart phone functionality (telephoning, texting, other game play), to use for the study. The girls were required to use the handheld to set two daily goals as part of a plan to improve the behavior related to each module, and the handheld then prompted them at 5 preselected intervals throughout the day to help remind them of their goals. Those girls who responded to 80% or more of daily prompts were rewarded that day with a song download.

The other half of the girls received a printed manual showing screenshots from each of the three modules, but because they were not interactive, the manuals did not issue reminders or give any rewards for appropriate participation.

Through dietary questionnaires, the researchers were able to assess the girls' fruit and vegetable intake along with their consumption of sugar-sweetened beverages. Screen time was measured with a different questionnaire.

The girls assigned to the handhelds used the program on about 2/3 of the days, and those who responded to more of the prompts during weeks 5-8 were more likely to reduce their intake of sugar-sweetened beverages by about 1/3 of a serving per day. On the other hand, the girls did report consuming more fruits and vegetables, although the number of responses to the prompts did not appear to be related to the amount consumed. No effect was seen for screen time, nor was there any effect on those in the control group (those who received the printed screenshots).

This is a pilot program, meaning that it was intended to help the researchers decide, first, if the design of the research had merit, and second, how many participants would yield a truly useful result. As such, then, the only take home message is that reminder programs such as these using mobile technology might be helpful in promoting certain behaviors among adolescents. More research is needed to determine how mobile technology can be most effectively utilized and on which behaviors.