More hot research!
I reported last year on a study that evaluated the effect of eating chilies on blood sugar levels and metabolism (Hot research! 7/14/06). Unfortunately, that study's results suggested only that the amount of insulin needed to control a person's blood sugar might be decreased after eating a meal containing chilies, but that the amount of energy the person burned - their basal metabolism - was unaffected.

Rice, Chilis, GERD and IBS
Irritable Bowel Syndrome (IBS) is characterized by chronic symptoms of abdominal pain, bloating, and constipation or diarrhea (or both). As many as 15% of people in the United States suffer from this disorder, which is treated both with medications and also with dietary adjustments. Gastroesophageal Reflux Disease (GERD) is defined as chronic symptoms of acid reflux from the stomach into the esophagus: heartburn is the most common symptom. It is also treated with medications and dietary adjustments. 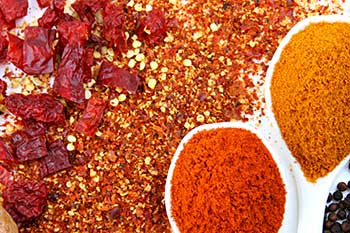 People ask me this all the time: "Is it true that eating spicy foods raises your metabolism?"

It sure seems like it ought to be true: when you eat spicy foods, you might feel warm and break out into a sweat, just as you would if you were exercising. Unfortunately, what research there is into the metabolic effects of eating capsaicin (the substance responsible for the spiciness in chilies) showed no effect on a person's resting metabolic rate. In fact, eating spicy foods seemed to reduce men's resting heart rate (Bite, 04/04/07).

Other research into the effects of spicy foods have looked at the possibility of treating GERD with chilies (Bite, 12/01/10), and there has also been some indication that spicy foods may help manage blood sugars (Bite, 07/14/06).

Some interesting research has just been published in the journal Appetite (2014; 73:183-88). Researchers in The Netherlands recruited 15 men and women between the ages of 20 and 40 to participate in a feeding study held on four separate 36-hour laboratory visits over the course of several weeks or months. All of the participants were healthy, normal-weight or overweight Caucasians taking no regular medications, who were lightly or moderately active, and were not actively trying to lose weight. Most particularly, they did not mind eating spicy foods.

After determining the appropriate number of daily calories each participant required to maintain their weight, the researchers designed four menus to be served to the participants on their four different visits to the feeding lab. The menus were essentially the same in terms of what foods were served, while the difference was in the number of daily calories and the amount of spice in the foods. The four menus were as follows:

The researchers asked the participants about their feelings of hunger, fullness, satiety, and their desire to eat on every hour during the 36-hour laboratory visit, including before and after each meal. They found that when the participants were subjected to the 100%CAPS menu, they felt "significantly more" satiety and fullness than when they were subjected to the 100%Control menu.

Even more interestingly, people's desire to eat scores during the 75%CAPS menu were the same as when they had the 100%Control menu, as were their satiety and fullness scores. In effect, adding spice to their reduced-calorie diets helped the participants feel just as full and satisfied as if they were not cutting calories.

This is a very small study with encouraging results - meaning that more research is needed to more fully explore the effects of capsaicin on appetite and satiety. That said, while spicy foods won't rev up your metabolism, they might well help you manage your appetite. If you decide to try this, keep in mind that the participants were not taking capsaicin in supplement form but were actually eating about 1 gram of red chili pepper with all three meals.