Listen to music, eat more
A lot of research has been done on environmental factors and their impact on people's eating behavior. Watching television, for example, has been positively related to increases in body fat and food intake along with decreases in exercise. The theory is that watching television distracts you from what you're eating, so you don't notice that you're full. Other studies have related listening to a recorded story to similar increases in food intake.

Kids also eat more while watching TV
I wrote not long ago about how distractions such as music during a meal will contribute to adults eating more than they would without music on (News Bite, 11/07/06), and you've probably heard the estimates that children consume about 25% of their daily meals in front of the television.

Put down the potatoes, and step away from the french fries
Researchers from Harvard Medical School recently reported in The American Journal of Clinical Nutrition (2006,83(2): 284-290) on the relationship between the consumption of potatoes and french fries and the risk of type 2 diabetes.

Why you eat more while watching TV 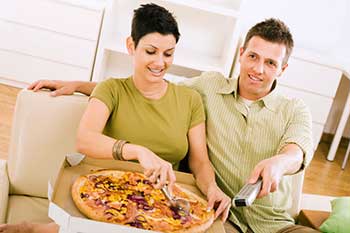 Several years ago I reported on two studies that showed that both adults (Bite, 11/07/06 ) and children (Bite, 02/14/07) tend to eat more when they are distracted, whether by music or television. While there are several other studies supporting the conclusion that people do eat more while watching television, the question remains as to exactly why.

Hunger and fullness appear to be more complex. When asking participants to rate their levels of hunger both before and after eating, those who were playing video games while eating a given amount of food reported smaller changes in their hunger level as compared to while not playing the game. On the other hand, studies using TV instead of video games found that people's hunger declined more after eating, suggesting that people's feelings of fullness and hunger were not affected by TV.

Researchers in Australia designed a study (Appetite http://dx.doi.org/10.1016/j.appet.2014.01.005) to sort this out: 62 female university students were randomly assigned to one of two experimental groups: the Single group (in which they were presented with one type of snack) and the Variety group (presented with four different types of snacks). Regardless of which group they were assigned to, all participants attended two lab sessions, set one week apart and at about the same time of day, during which they either watched an episode of Friends for 30 minutes or did nothing for 30 minutes. In both cases they were given pre-measured amounts of their assigned snack (Single or Variety) and told to help themselves to as much as they wished to eat. The number of pieces they ate and the calories they consumed were calculated by measuring the amount of snacks left.

At the start and end of each session the subjects were asked to rate how hungry, full, happy, stressed, and relaxed they were, then tasted and rated their liking for each type of snack food. Those who were assigned to the Single group received the snack they liked best that day for their test food.

The authors of the study found that watching television universally meant eating more, whether the participant was in the Single or the Variety group. On average, the Variety group ate about 10% more calories than the Single group. As expected, those in the Single group rated their liking for their single snack type lower after eating - but the difference in liking was greater when they were not watching TV, which suggests that the effects of sensory specific satiety were less while watching TV (that is, they got less bored with their food). Similarly, when watching TV it took eating more food to reach the same level of post-snack fullness than it did when not watching TV.

It seems as though it's a combination of factors that leads you to eat more while watching television. If you're watching your weight, you have two choices: do not watch television while eating, or if you do, choose the amount of food you will eat beforehand and don't get up for more at the commercial.