Soda and Stroke
Did you know that as of 2009, the average American drinks over 45 GALLONS of carbonated beverages, both sugar-sweetened and non-caloric, per year? It's the single largest source of added sugar in our diet.

Diet Sodas: Do They Make You Fat?
According to the Coca Cola Company, Fresca products have about 2 calories in an eight ounce serving. A can of Fresca is 12 ounces so 6 cans per day would be only 18 calories.

Another reason to avoid added sugar 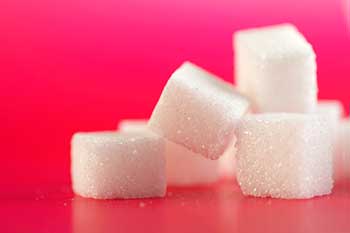 Because I'm an advocate of avoiding processed foods and sugary drinks, I don't spend a lot of time talking specifically about added sugars. Yet the average American drinks enough soda - between 45 and 50 gallons of it per person - to consume about 39 pounds of sugar a year.

Here at Dr. Gourmet I've reported on the links between soda and the risk of stroke (Bite, 5/16/12), weight gain (Bite, 4/17/07), diabetes (Bite, 5/23/07), and heart disease (Bite, 5/12/06). A study just published in JAMA Internal Medicine (doi:10.1001/jamainternmed.2013.13563) goes a step further, establishing a link between sugar and cardiovascular disease. And not just sugar in sweetened beverages, but all added sugar, including desserts (both dairy- and grain-based), candy, cereals, yeast breads, and fruit drinks. (This did not include naturally occurring sugars such as those in fruit or fruit juices.)

The researchers, including scientists from the Centers for Disease Control, Emory University, and Harvard University, made use of data collected for two versions of the long-term, large-scale study known as the National Health and Nutrition Examination Survey (NHANES) (in this case, the original and III), which gathered demographic, health, and dietary information from many thousands of Americans from 1988 onwards. Using a process developed by the National Cancer Institute, they were able to look at the individual participant's dietary questionnaire and estimate the amount of added sugar in a participant's diet. From there, they could calculate the percentage of calories that individual ingested each day from added sugar, assuming a 2,000 calorie per day diet.

Finally, the sugar intake of those participants who died of cardiovascular disease during the study was compared to those who did not. After taking into account variables like age, ethnicity, gender, Body Mass Index, and even overall dietary quality, compared to those who got less than 10% of their calories from sugar, those whose sugar intake was in the 10% to 25% range were 30% more likely to die of cardiovascular disease.

Even more shocking is that those who got more than 25% of their calories per day from added sugar were nearly 3 times more likely (275%) to die of cardiovascular disease.

A little bit of sugar is not bad for you: remember that those in the under 10% range were still consuming added sugar, not NO added sugar at all. But they were keeping their added sugar intake under 200 calories per day, which is 12.5 teaspoons in a 2,000 calorie per day diet or about 9 teaspoons for those on a 1,500 calorie per day diet. Look at your own dietary habits: are you drinking sugar-sweetened drinks or eating a lot of desserts? Switch to water, tea, or coffee and have fruit for dessert instead of cookies.