Best Snack? Nuts!
When I'm giving a lecture about eating healthy, someone invariably asks about snacking. As you may already know, I'm not a big fan of snacking between meals when you're trying to lose weight. All too often that snacking simply adds calories that you don't need. Still, people really want to know what is the best snacking option.

Nuts and Cholesterol
In my recent The Dr. Gourmet Diet Plan Coaching Article about snacking I talk about how important snacking is as well as the best snack choices. Some people are savory or salty snackers (pretzels or chips), while other are sweet snackers (cookies or chocolate). I suggest some healthier options for each snacker type: fruit for sweet snackers, for example, and nuts for savory snackers. (Personally, I like bananas and pecans or pistachios.) 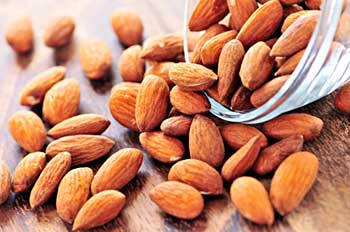 If you've been following Dr. Gourmet for even a few months, you're probably aware that I am a big fan of nuts as snacks. They're full of unsaturated fats, fiber, vitamins, minerals, and antioxidants, plus they taste great and are convenient. It almost doesn't matter what kind of nuts you choose - they're all great for you.

An exciting study was just published in the New England Journal of Medicine (2013;369(21):2001-11) that looks at nut intake and its relationship to death from any cause as well as deaths from cancer, heart disease, or respiratory ailments. The researchers made use of data gathered through two large-scale, long term, ongoing studies: the Nurses' Health Study (which began in 1976) and the Health Professionals Follow-Up Study (which began in 1986). Every two years the participants respond to detailed dietary and lifestyle questionnaires that include questions about nuts, including peanuts. After excluding those with a history of cancer, heart disease, or stroke, the participants included in this study numbered over 76,000 women and 42,000 men.

Over the course of the ~30 years of the data collection, the researchers were able to find out the cause of death for 98% of all those study participants who died. Those deaths were then grouped into nine categories for the purposes of their analysis of causes of death.

After adjusting for such variables as smoking status, age, physical activity, red or processed meat intake, fruit and vegetable intake, and alcohol use, the researchers found that compared to those who did not eat nuts at all, eating nuts (regardless of amount) made the participant 7% less likely to die of any cause. That may seem less than interesting, but look at what happens as the amount of nuts eaten each week increases:

Even more amazing are the results they saw for specific causes of death:

Eating nuts more frequently meant a corresponding reduction in the risk of death.

Eating nuts as a daily snack may be the easiest, cheapest thing you can do for your health. While plain, unsalted nuts are best, lightly salted nuts are fine for those who don't need to limit their sodium intake. (We also know that the calories in nuts - in moderation - don't seem to contribute to weight gain.) Avoid nuts coated with sweets like chocolate or toffee: the nuts are still great for you but you likely don't need the extra calories in the sweet coatings.