The Mediterranean Diet and heart attack survival
We know that the Mediterranean Diet can help prevent cardiovascular disease, but what if you have an acute coronary event anyway? Dr. Panagiotakos and his team of researchers in Greece (Nutrition 2006;22(7-8):722-730) selected six major hospitals in Greece, and for a term of one year enrolled in their study almost all the patients in those hospitals who were diagnosed with acute coronary syndrome (meaning either a heart attack or unstable angina).

Eating fish slows the progression of heart disease!
We have known for a long time that eating fish is good for you. Eating fatty fish like tuna and salmon has been shown to reduce the risk of sudden death. There has not been research, however, to show what effect eating fish might have on the progression of the narrowing of arteries that feed blood to the heart. It is the reduction in size of these blood vessels (the coronary arteries) with plaque that doctors call atherosclerosis.

What is the Mediterranean Diet?
The Mediterranean Diet is the name that has evolved to symbolize the healthy foods eaten by those people whose countries surround the Mediterranean Sea. Their diets are higher in vegetables, legumes (beans and peas), fruits, nuts and whole grain cereals. The main fat used is olive oil and there is less use of highly saturated fats like butter and lard.

Improve Your Diet, Live Longer - Even After a Heart Attack 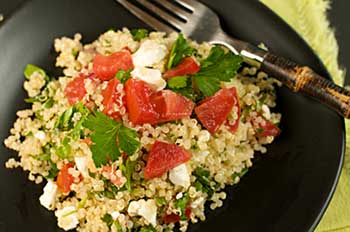 Back in 2007 I reported on a study performed in Greece (Nutrition 2006;22:722-730), looking at all of the individuals in six local hospitals who had been diagnosed with a heart attack or unstable angina. The researchers correlated the patients' pre-hospitalization diets with their chance of having another coronary event in the thirty days immediately following their date of hospitalization. In short, those whose diets more closely matched a Mediterranean-style diet were far less likely - up to 23% less likely, to be exact - to have another cardiac event or die in those first thirty days after hospitalization.

This was an important finding, showing that even if your adherence to a Mediterranean-style diet wasn't perfect, just a few differences in your diet could improve your risk of surviving a heart attack. Yet the study looked only at the patients' diets before their heart attack - what happened if they improved their diet after their heart attack?

A study published in JAMA Internal Medicine answers that very question (2013;173(19):1808-1819). In this case, the researchers made use of information gathered through the Nurses' Health Study and the Health Professionals Follow-Up Study, both large-scale, long-term, ongoing studies including some 170,000 women and men. For the purposes of their research, the team identified about 4,000 persons who had been diagnosed with an initial heart attack during the study. Using dietary questionnaires gathered every four years of the study, the researchers were able to compare the participants' diets before and after their heart attack, assigning each person a score based on what is known as the Alternative Healthy Eating Index 2010 (AHEI2010), which is very similar to the classic Mediterranean Diet score, but includes food items often found in the Western diet, such as saturated and trans-fats, sugar-sweetened beverages, the quality of the carbohydrates in the diet, and red meats and processed meats.

If you've had a heart attack, you can still make a huge difference in your life by improving your diet, no matter how bad your diet might have been before the heart attack. Small changes, like switching to whole-grain bread rather than white bread, avoiding processed meats and sugar-sweetened beverages, and eating fish twice a week, can help you live a longer, healthier life. Read our section on the Mediterranean Diet to find out what other small changes you can make.