Overweight children often remain overweight
Childhood obesity has nearly tripled since the 1970's, yet there are no clear guidelines to help pediatricians identify which children are at risk of obesity and when. Using growth data from the National Institute of Child Health and Human Development, researchers from six locations around the United States tried to identify one of the early signs of adolescent obesity.

More on the Plate Means More in the Tummy
We know that in adults, a larger portion size will mean consuming more calories at that meal. We also know that foods that have more calories per serving (are "energy dense") will often do the same. 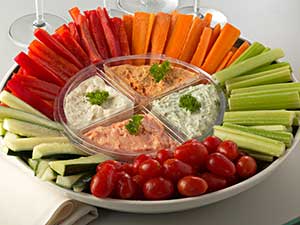 Parents, you know how hard it can sometimes be to get your preschooler to eat vegetables. One study estimates that they average as little as 1/2 serving or less per day! Even using a combination of strategies like repeated tastings, peer influence, and pairing new flavors with familiar ones can come up (nearly) empty when it comes to eating more vegetables.

Researchers at Pennsylvania University, with funding from the McCormick Science Institute, a research organization supported by the McCormick & Co., Inc., the spice company, devised a study to find out if preschoolers might be more likely to eat vegetables when they were presented with a dip. (Interestingly, the McCormick Science Institute web site states that "MSI does not support research on spice blends proprietary to McCormick & Co., Inc....")(J Acad Nutr Diet 2013;113(8):1090-1095)

Almost 30 children between the ages of 3 and 5 who attended a local child-care center were recruited to participate in a tasting study. (Or rather, their parents were recruited to allow their children to participate.) First, the children tasted and rated 6 different raw vegetables to find a vegetable they liked, a vegetable they disliked, and one they simply refused to eat. At the same time they tasted 5 varieties of low-fat vegetable dips (including such flavors as plain, "pizza flavored," and ranch) to find which one they liked best.

The experiment itself was in two parts. First, each child was presented with the three vegetables they liked, disliked, and refused along with a portion of plain, non-flavored low-fat dip and a portion of their preferred dip. They were encouraged to taste their favorite vegetable and dip combination first, then allowed to choose which vegetables and dips to taste next. These were then rated as "yummy," "just okay," or "yucky."

In the second part of the experiment, at two different snack times the children were presented with one of two fairly unfamiliar vegetables (in this case, celery and steamed yellow squash) both with and without their preferred dip, and encouraged to eat as much as they wanted. Once again the children rated all four variations as "yummy," "just okay," or "yucky." How much of each vegetable they ate and whether it was with or without dip was measured.

This is a small study performed on a majority-white group of middle class children, and it doesn't show whether the children were more likely to eat the vegetables plain after eating them with the dip, but it's certainly a strategy to try if you're having trouble getting your preschooler to eat vegetables. Try offering vegetables with an appropriate portion of dip - here at DrGourmet.com you can find recipes for such familiar favorites as Thousand Island Dressing, Green Goddess Dressing, Blue Cheese Dressing, and Honey Mustard Dressing as a start to finding the right vegetable dip for your child.