Breakfast Better for More than Your Weight
I've talked a lot recently about how important breakfast is to your health (Fiber for Breakfast! 10/17/07) and your waistline. I've also talked a lot about fiber and its effect on your health (Whole Grains and Hypertension 8/15/07). In a study that just came out in the Archives of Internal Medicine (2007;167(19):2080-2085), researchers at Harvard University have discovered that high-fiber cereals seem to be even more important than we thought. 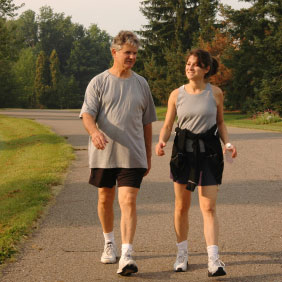 Is your neighborhood walkable? As part of the overall effort to address high levels of overweight and obesity along with low levels of exercise, researchers are looking not only at barriers to eating healthy, but also at barriers to exercise. Walking is one of the easiest and cheapest exercises to perform, but some neighborhoods are more conducive to walking than others.

A Walk Score® measures a neighborhood's ability to support walking, whether that's walking for transportation or for leisure. This open-source and publicly accessible project combines information on the different types of destinations in the area (grocery stores, restaurants, schools, etc.), the number of intersections in the area, and the length of each block to arrive at a score between 0 and 100 (100 being better). Similarly, a Transit Score® measures a neighborhood's access to public transit.

It's all very well to look at the neighborhood, you might say, but a high walkability score is pretty meaningless if people get in their cars anyway, right?

Fortunately a recent team out of the University of Michigan and the University of North Carolina at Chapel Hill took a close look at the relationship between Walk Score, Transit Score, and whether people actually walk (Am J Prev Med 2013;45(2):158-166). They made use of data gathered in the Multi-Ethnic Study of Atherosclerosis, a health study carried out in 6 specific cities in the United States. Part of the information gathered in the study included questions on exercise and walking and whether that walking was for transportation (to get to the bus or to go to the grocery store, for example), or for leisure (specifically for exercise, perhaps, or to walk the dog).

The Walk Scores for each participants' address in the 6 cities (Baltimore, Maryland; Chicago, Illinois; Forsyth County, North Carolina; Los Angeles, California; New York, New York; and St. Paul, Minnesota) were correlated with the type and amount of walking reported by that participant.

The good news is that those who lived in locations with higher Walk Scores were indeed more likely to walk - most often to run errands or to go to specific places - than those who lived in a neighborhood with a lower walk score. Higher Transit Scores meant that people were less likely to not walk at all, but the relationship between higher and lower Transit Scores and the amount people walked - when they did walk - failed to reach statistical significance.

Obviously it's not realistic for me to advise you to move to a neighborhood with a higher Walk or Transit Score - today's research is presented as something you might want to be aware of. While the neighborhood your home is in might not be very walkable, perhaps that of your workplace is. Just a little more exercise, such as walking during lunch, can have a big impact on your health: I have a patient who gets off the bus one stop early on the way to work and gets in part of his daily exercise that way.