Yes, You Can Eat Red Meat (Just Not Every Day)
My patients are always saying that they can’t eat healthy because they like to eat red meat. Well, I like eating a good steak as much as the next person and I do. I don’t eat red meat that often – probably about 5 times a month or so. I do eat leaner cuts and Dr. Gourmet recipes reflect these healthier choices.

Red Meat is Fine! Redux
Nutritionists and doctors have been saying for years to limite your intake of red meat. Certainly if you've used The Dr. Gourmet Diet Plan to plan your meals, you've seen that I recommend that you limit yourself to one red meat meal per week. In terms of nutrition, "red meat" includes unprocessed beef, pork and lamb. (Pork is not the "other white meat"!) "Processed meats" include items such as hot dogs, salami, bacon and other cured meats.

Don't panic!; or, Yes, you can still eat red meat
While the media has been making much of the story, acting almost as if eating red meat of any kind will make you drop dead, the truth is that if you've been following Dr. Gourmet and eating a Mediterranean style diet, you know that there's nothing to be so alarmed about. 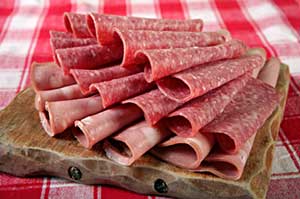 We know that eating red meat, especially processed meats like hot dogs, bacon, or bologna, should be limited to once a week or less. Red meats and processed meats have been linked to increased risks of colon and rectal cancers, heart disease and diabetes, and death from any cause.

A study just released a couple of days ago in the journal JAMA Internal Medicine (doi:10.1001/jamainternmed.2013.6633) assesses the risk of Type 2 Diabetes in those who increase (or decrease) their intake of red meat. Researchers at Harvard along with colleagues at the Cleveland Clinic and in Singapore made use of data collected in three large-scale, long term studies, including over 25,000 men (Health Professionals Follow-up Study) and almost 125,000 women (Nurses' Health Studies I and II). As part of those studies the participants responded to detailed dietary questionnaires on a regular basis as well as providing demographic and health information.

With that data the researchers were able to compare the diets of those who developed Type 2 Diabetes with those who did not, specifically focusing on whether the participants' intake of red meat increased, decreased, or stayed the same over the 20 years of follow-up.

As you might expect, as compared to those who ate red meat 2 times per week (or less) and maintained that intake throughout the study, those who increased their intake of red meat by 3 servings per week or more were 48% more likely to develop Type 2 Diabetes in the 4 years after they made that change in their diet. A smaller increase (less than 3 servings per week) came with a smaller, but still significant incrased risk of 21%. Decreasing intake, on the other hand, meant that the risk of Type 2 Diabetes decreased as well, but more slowly: no change in risk was seen in the first 4 years after the change in intake, but over the course of the rest of the study the risk was reduced by 10%.

It is worth noting, however, that those who increased their intake of red meat tended to have a higher initial Body Mass Index, tended to gain weight over the course of the study, and had poorer diet quality in general.

For our purposes here at Dr. Gourmet, I have to quote my wife, who remarked of this study, "Still not news." We know that higher intake of red meat, both processed and unprocessed, is not good for us. What this does tell us is that the Mediterranean Diet guideline of red meat once a week or less is just fine.