An egg a day may help you keep your eyesight
About 5% of people 65 or older suffer from Age-related Macular Degeneration (AMD), a disease which affects the part of the eye responsible for the sharpest central vision. One type of AMD has been associated with reduced blood levels of two antioxidants, carotenoids known as lutein and zeaxanthin.

Don't panic!; or, Yes, you can still eat red meat
If you follow health news at all, whether that's online or just catching the evening news on television, you've probably heard about this study, just published in the Archives of Internal Medicine (doi:10.1001/archinternmed.2011.2287). While the media has been making much of the story, acting almost as if eating red meat of any kind will make you drop dead, the truth is that if you've been following Dr. Gourmet and eating a Mediterranean style diet, you know that there's nothing to be so alarmed about. 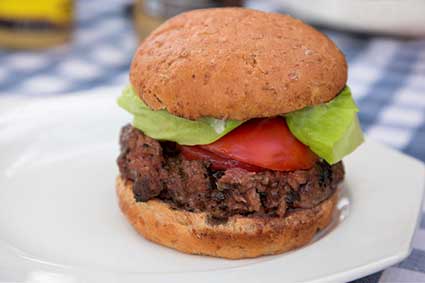 Your gut is full of microscopic creatures known as microbes. Among other things, they are critical to digestion. You've probably seen yogurt advertised as containing "live active yogurt cultures," and these do help your gut microbes to thrive, keeping everything running smoothly. This is also why many people experience diarrhea when they take antibiotics: they kill the good digestive microbes along with the germs that are causing whatever illness you've been prescribed the antibiotics to treat.

Studies in animals have established that those intestinal microbes process a substance called choline, which is part of lecithin, to create trimethylamine-N-oxide (a mouthful we'll just call TMAO), which encourages artherosclerosis (plaque formation in the arteries). Researchers at the Cleveland Clinic have confirmed this in humans through two studies recently published together in the New England Journal of Medicine (2013;368(17):1575-1584).

In the first study, 40 healthy adult men and women ate two whole, large hard-boiled eggs, which contain about 250 milligrams of choline apiece. Before and afterwards their blood and urine was tested for TMAO. The participants were then prescribed two different antibiotics to take daily for one week, then they returned to the lab and repeated the blood and urine testing before and after eating eggs. This allowed the researchers to compare the effects of the antibiotics on the amount of TMAO in the urine and to conclude that the intestinal microbes were definitely responsible for the production of TMAO by metabolising choline.

In the second study the researchers were able to obtain blood samples and TMAO levels from over 4,000 patients who were receiving cardiac catheterization at the clinic. After three years the researchers were able to access the patients' records to find out which patients experienced what is known as "a major cardiovascular event," i.e., stroke, heart attack, or death, and compare their TMAO levels with those who did not have a major cardiovascular event.

After taking into account many variables, from age to whether they were on certain medications and the progression of their heart disease, the researchers found that those with the highest TMAO levels were 43% more likely to experience a stroke, heart attack, or death than those with the lowest TMAO levels.

In their conclusion the researchers noted that the major sources of choline in the diet - eggs, liver, beef, and pork - are already considered foods to be enjoyed with caution and moderation. Should you cut them out of your diet completely? Not unless you want to for reasons other than the amount of choline they contain. You can still safely enjoy your eggs, liver, beef, and pork - in moderation.