Huge News About Nuts
If you've been following Dr. Gourmet for even a few months, you're probably aware that I am a big fan of nuts as snacks. They're full of unsaturated fats, fiber, vitamins, minerals, and antioxidants, plus they taste great and are convenient. It almost doesn't matter what kind of nuts you choose - they're all great for you.

Diverticulitis, nuts and seeds
People with diverticulosis have small out-pouchings of the colon. It is a very common condition with 1/3 of the population developing diverticulosis by the age of 60 and 2/3 by the time they reach 85. Oftentimes the pouches will become infected and the result can be quite serious with abscess formation, hospitalization and frequently surgery. The longstanding theory has been that the seeds might become stuck in the small diverticula (pouches) and create a setting for infection (known as diverticulitis). 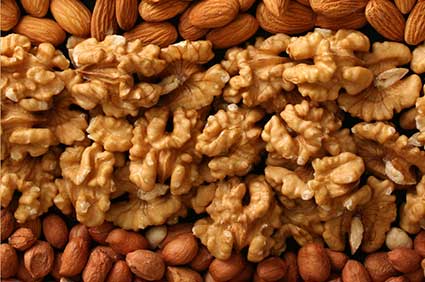 When people ask me what they should snack on in place of Doritos or Wheat Thins or other savory snacks, I have a one-word answer for them: "Nuts."

It's true. For those people who are savory snackers, nuts should be your first choice of snack. (If you are a sweet snacker, fruit should be your first choice.) While I would prefer that people eat their nuts raw and unsalted, roasted and salted are also great and are certainly much better for you than Doritos. While the nuts do have some salt, there's definitely less than is in the Doritos and the nuts, regardless of what kind they are, contain great polyunsaturated and monounsaturated fats and tons of minerals. Research has shown that adding nuts such as walnuts and pistachios to your diet can help improve your cholesterol profile and almonds may reduce your risk of developing diabetes.

Today's research adds to the good news about nuts. In research partially supported by the California Walnut Commission (and partly by the National Institute of Health), researchers at both Harvard University and the National University of Singapore collaborated on a study that made use of data collected through two long-term, large scale studies of female nurses (J Nutr 2013;143(4):512-518).

The over 220,000 women in these two studies, known as the Nurses' Health Study I and II, responded to health, lifestyle, and dietary questionnaires sent to them every two years for as many as 20+ years. For the purposes of their study, the researchers excluded any women who had diabetes, heart diseases, stroke, or cancer at the start of either of the studies, leaving over 130,000 participants.

As part of the dietary questionnaires the nurses estimated their intake of peanuts, tree nuts, and other specific nuts, including walnuts. The walnut intake of study participants who developed type 2 diabetes was then compared to that of those who did not.

After taking into account such variables as age, race, family history of diabetes, smoking status and other dietary variables such as whole grain or vegetable intake, the researchers found that the more walnuts a woman ate, the lower was her risk of developing type 2 diabetes. The problem, however, is that when the researchers included Body Mass Index as a variable, the relationship was much less strong (although still considered clinically significant). In fact, the results showing a relationship between walnuts and type 2 diabetes was very similar to the results seen when the researchers looked at tree nuts in general as well as peanuts.

Further, those women who ate more nuts tended to have lower Body Mass Index, get more exercise, and eat more fish, whole grains, and fruits and vegetables - all of which can also affect one's risk of type 2 diabetes.

The results of this study do not suggest that walnuts are significantly better at preventing type 2 diabetes (or better for you in general) than peanuts or other tree nuts. But that's OK, because it does show that eating nuts - whatever kind you enjoy as long as they're not coated in something sugary - is great for you. Snack well on your favorite nuts and don't worry about which ones are "best."