Rice, Chilis, GERD and IBS
Irritable Bowel Syndrome (IBS) is characterized by chronic symptoms of abdominal pain, bloating, and constipation or diarrhea (or both). As many as 15% of people in the United States suffer from this disorder, which is treated both with medications and also with dietary adjustments.

Taking Vitamins to Prevent Cancer or Heart Disease
In my practice we ask our patients to bring all of the medications they are taking, including vitamins and herbs or supplements, to every office visit. This is so that if a patient is seeing more than one doctor - maybe a cardiologist in addition to visiting me, an internist - we can make sure that none of the medications they are taking will interact with each other in negative ways. 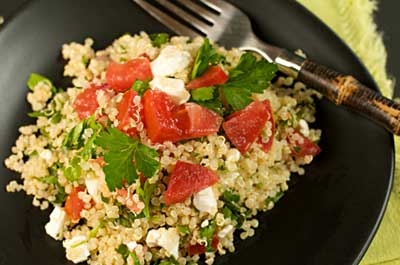 Less than 10% of those in Iran who are diagnosed with esophageal squamous cell carcinoma survive for 5 years or more past diagnosis. (By way of comparison, 84% of women diagnosed with breast cancer in the UK survive 5 years or more.) Esophageal cancer is the sixth most common cancer in the world and fourth most common in developing countries. It is even more common in what is known as the "esophageal cancer belt," which includes Iran, China, and northern France.

Researchers in Iran noted that a Mediterranean-style diet has been linked with a reduced risk of all cancers and that those living in Mediterranean countries have the lowest incidence of cancers of the airway or upper digestive tract (J Amer Coll Nutr 2012;31(5):338-351). Previous research into the role of diet in the risk of esophageal cancer have focused in specific foods or even individual nutrients rather than overall dietary patterns like the Mediterranean diet. Would a higher Mediterranean diet score, even in a high-risk population such as Iran, mean a lower risk of esophageal cancer?

To find out, they recruited 47 men and women who had been diagnosed with esophageal cancer within 6 months of the study interview, done while they were admitted to the hospital. They were between the ages of 40 and 75 and had no history of other cancers. As a control group, the researchers recruited another 97 men and women of similar ages to the test group who were also admitted to the hospital for non-cancer diagnoses.

Trained interviewers met with each participant to assess their dietary intake for the past year. A Mediterranean diet score on a scale of 0 to 100 (with 100 being a perfect Mediterranean diet) was assigned to each patient. Along with diet, the researchers also assessed such variables as height and weight (Body Mass Index) as well as social and demographic characteristics and medical history. The dietary scores of those diagnosed with esophageal cancer were then compared to those who did not have esophageal cancer.

What's significant about this study is that the highest any of the participants scored, on a scale of 0-100 (NOT our usual 0-9), was only 51 points. This means that a *very* small difference in an individual's diet could affect their risk of esophageal cancer in a very significant way. Generally speaking, in this study those who tended to eat more whole grains, fish, olive oil, and fruit were less likely to develop esophageal cancer. Something as small as a couple pieces of fruit or choosing whole wheat or quinoa pasta could significantly affect your health.