Trust: An Editorial
It's hard to know who to trust. There is so much information about diet, weight loss and nutrition out there. Much of it is pretty silly and a lot is downright dangerous. As you know I try to provide you with the best, evidence-based information. We base everything we do at Dr. Gourmet on the most up to date research available.

Organic is Better for You
When I talk to patients about eating better, vegetables and fruit are a big topic. "Pile on the vegetables at dinner and snack on some fruit," I tell them. "They'll fill you up, they taste great, and the fiber is great for you."

Everybody Else Does It.... 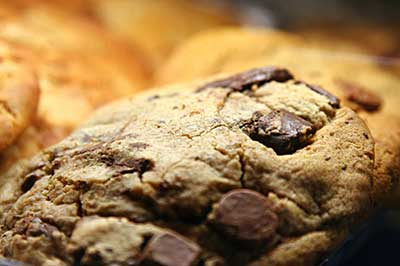 Peer pressure isn't just about school children pushing each other into smoking cigarettes or other risky behaviors. It works in eating, too - and even when those peers aren't peers, really, or even present.

Researchers in the United Kingdom noted that how much a person eats on a particular occasion can be influenced by how many other people are present as well as how much the person wants to make a good impression on those they are eating with. Studies on the influence of these "social norms" are done using actual people, of course. It's well-established, for example, that if two people are eating together and one person eats very little, the other person will eat less than they would if they had eaten alone. (Try this when eating out with a friend - it's truly eye-opening to see this in action.)

What if, the researchers wondered, the person or persons doing the influencing weren't actually present - or even real? Would just believing that others ate a certain amount affect how much a person chose to eat?

To find out, they chose snacks as their test food - specifically chocolate chip cookies (Appetite 2013;65:20-24). The first part of the study established the basis of comparison: how many cookies would a female undergraduate student eat when alone? The answer was "four."

They then recruited 66 other female undergraduate students to participate in their "study on snacking." The women were then randomly assigned to one of three groups. In the two study groups, the individual subject was placed in a room alone and asked to sign in on a signup sheet. Each signup sheet had already been signed by four previous (fictitious) participants and included a count of how many cookies each participant had eaten. The fictitious participants for those in one study group all ate far more than four cookies: 8, 9, 9, and 10 cookies, which set what the researchers called a "high intake norm." The fictitious participants for the other study group ate less than four cookies: 1, 1, 2, and 2, setting a "low intake norm." The third group acted as the control group and had no signup sheet (and thus no norm).

They found that those women who believed that other, previous participants - even though they were fictional - had eaten between 8 and 10 cookies ate almost 5 cookies (on average) themselves. Those who believed that previous participants had eaten only 1 or 2 cookies themselves only ate an average of 2 cookies. Those in the control group, however, ate an average of just over 3 cookies.

The tendency to modify how much you eat based on how much others eat can affect you even if those others are people you don't know or are not even present. Keep this in mind when deciding how much to eat, and don't let what - or how much - other people eat affect your choices.