Wash Those Veggies
I just got back from this morning's Farmer's Market. It is so uplifting to see all the fresh produce out on the tables. I love being in the midst of so many great fruits and vegetables, smelling the fresh herbs, seeing all the colors and imagining how wonderful that produce will taste in my new recipes. It is good seeing children working with their parents, telling me about their gardens and learning how to make change.

Does V-8 count as a serving of vegetables?
The dietitian at my local hospital is telling the diners that a glass of V-8 juice is the equivalent of having a serving of 8 vegetables. True?

Does roasting or cooking reduce the nutrients in vegetables?
I love to roast all different kinds of vegetables, such as broccoli, asparagus, peppers, green beans, zucchini, etc. I think it gives them a great flavor. I have read that when you roast or cook vegetables, they lose their benefits, that you should only steam vegetables. Is this true?

Organic is Better for You

(But Not the Way You Think) 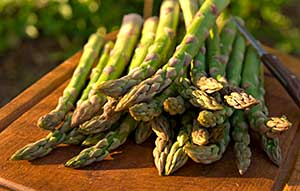 When I talk to patients about eating better, vegetables and fruit are a big topic. "Pile on the vegetables at dinner and snack on some fruit," I tell them. "They'll fill you up, they taste great, and the fiber is great for you."

"But organic foods are so expensive - I can't afford that stuff," they tell me.

A lot of people feel that they only way to eat healthy is to eat organic. "It's better for you," they'll insist. Fortunately a thorough review of peer-reviewed research into organic foods was published in the Annals of Internal Medicine (2012;157(5):348-366). Researchers at Stanford University in California did not limit their analysis to the nutrient content of fruits and vegetables, however: they also assessed the levels of contaminants, such as pesticides and bacteria, in fruits and vegetables as well as chicken, pork and beef. Seventeen studies examined the effects of consuming organic foods in humans, while 223 studies looked at nutrients and contamination levels in foods.

After grouping together the data from the relevant studies, the researchers found no significant difference between the levels of Vitamins A or E in organic produce, raw milk, pork, or beef as opposed to those grown by conventional means. Similarly, the levels of protein and fat content were similar in organic and conventional raw milk.

It would appear that organic foods are no more nutritious than conventional foods - and that's good news for those who worry that they're doing their family a disservice by not being able to afford organic foods. (That said, I do believe that organic bananas - my favorite fruit - taste better than conventionally-grown bananas.) And while conventionally-grown produce might be more likely to be contaminated with pesticides than organic produce, choosing organic does not remove that risk altogether. It's still important to wash your produce thoroughly, no matter what type you choose.

That's also true for meats - whether conventional or organic. The levels of bacterial contamination are certainly something you should be concerned about, but this is a matter for caution, not alarm. Wash your hands before and after handling raw meat, rinse your meats in water before cooking, and always wash your cutting boards and knives in hot soapy water.