Fast Food: Not Much Better (But at Least No Worse)
I know from talking to my patients that people eat a lot of fast food, but I hadn't realized that over 25% of adults in the United States eat fast food at least twice a week. Overall, fast food accounts for 15% of food consumed in the U.S. Even worse, children eat more fast food than they eat at school. 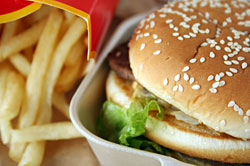 The fast food industry in Australia self-regulates their advertising to children through a voluntary code. Those who sign the code pledge that they may only market to children if those products meet minimum nutrition standards with regard to the number of calories and the amounts of sugar, saturated fat and salt in the foods. As you might expect, these standards are set by the fast food industry itself. A report in the journal Appetite (2012;58(1):105-110) notes that the lunch and dinner meals should each provide only about 30% of a child's daily energy requirements. How do children's fast food meals fare against that 30% target?

The Australian researchers made use of the nutrition information available from the website of each fast food chain that sold meals targeted toward children. They calculated each possible combination of foods that could be purchased from each chain and analyzed each meal's calories, saturated fat, salt and sugar contained in each meal. The six companies that signed the self-regulation pledge - Chicken Treat, Hungry Jack's, KFC, McDonald's, Oporto and Red Rooster - were included in the analysis.

Only 3% of the meals contained less than 30% of the estimated recommendations for 4 year olds, and only 4% of the meals were appropriate for 8 year olds. (All of these - 13 different meal variations - were from McDonald's.)

The researchers note that although healthier options for children have been introduced in many fast food restaurants, "there is no evidence that they are actually being purchased." In fact, one study the researchers refer to showed that parents who were ordering food for their 6 to 12 year old children were not actually ordering children's meals at all - they were ordering adult-sized foods for their kids.

In their conclusion, the researchers recommend something that I've been advocating for years: the fast food chains should simply reformulate their foods to be healthier, without telling people that it is healthier. In the mean time, if you must take your kids out for fast food, the healthier choices for your kids will be the smaller, chicken-based meals, such as three piece chicken nuggets or snack wraps, and they will not include soda. Choose milk, juice or water instead.