Yes, chocolate IS different for men and women
The effect of food stimuli and the resulting feeling of satisfaction (or "satiety") in the brain can actually be observed by performing Medical Resonance Imaging (MRI) scans on the brain. While sex differences in eating behavior have been documented, most research on brain activation related to eating has been limited to men only or have lumped men and women together.

Why Do You Crave Chocolate at That Time of the Month?

Chocolate cravings are an interesting phenomenon: over 45% of undergraduate women in the United States report having a regular craving for chocolate, and over 90% of women admit to craving chocolate at least once in their lives. Oddly enough, this phenomenon seems to be largely limited to adults in North American countries - other cultures do not seem to crave chocolate any more than they might crave anything else.

About half of those women who experience chocolate cravings report that their cravings are related to certain points in their menstrual cycle. This has been of great interest to researchers, as you might imagine, but no evidence has been found of any biological reason for these cravings. The various hormones involved in the menstrual cycle have been fairly extensively studied with regard to the frequency and intensity of chocolate cravings and... nothing. 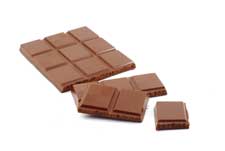 With that in mind, researchers at the University of Pennsylvania and Towson University collaborated on a study to look at whether chocolate cravings might be related to overall eating behaviors and attitudes about one's weight, body, control over eating, or other behaviors (Appetite 2011;57(1):1-5).

They recruited 97 undergraduate women of about 20 years of age whose Body Mass Index indicated that they were of normal weight. The women responded to several questionnaires that were administered online through a secure server. The women were asked if they craved any particular foods, and if so, which foods did they crave the most? Over 22% stated that they craved chocolate more often than any other food. About 28% of those women believed that their chocolate cravings were linked to their menstrual cycle, and most of those felt their cravings were strongest beginning about 4 days before menstruation and lasting about 4 days into the menstrual period.

Among the behavioral questionnaires they responded to were:

Although other researchers have thought that the cravings were linked to women using chocolate to help them cope with the emotional and physical symptoms associated with the time just before menstruation, this study does not bear that out, as Drs. Hormes and Timko point out. Rather, they feel that the cravings are related to the natural weight fluctuations women experience around that time. They state, "women who are especially susceptible to weight gain... may restrict their intake of high-fat, high calorie foods... in an effort to counteract anticipated weight gain."

You probably know what happens when you tell yourself that you can't have something: you want it even more than before. If you are craving chocolate at certain times of the month, don't beat yourself up over it: have a small amount of really fine quality chocolate, enjoy it, savor it, and don't feel guilty about it.