If mercury in fish is linked to Alzheimer's disease, how much fish should I eat?
I heard on the news that eating fish (because of the mercury in it) is now proven to be a link to Alzheimer's disease. They didn't specify how much or how many times [the people affected] eat it per week. I am thinking they would mean what the average person might eat: 2-3 times a week. The other days we usually eat other meats. Have you any opinions on this factor.

Is it safe to eat canned tuna every day?
I love tuna and it's cheap. I have been eating it most days taking a sandwich to work. Is this a problem? 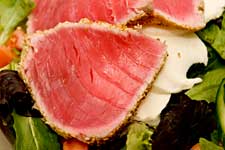 I get asked this question pretty regularly: "I know I should eat fish, but what about the mercury contamination?"

It's a fair question and there is some cause for concern. On the one hand, we know that eating fish is the best way to get the omega-3 fatty acids that are so good at helping you avoid heart disease. On the other hand, mercury poisoning can damage the brain, kidneys and lungs, and there's some evidence that mercury poisoning is associated with an increased risk of heart disease. To eat fish, or not to eat fish? That's the question.

Researchers in Sweden decided to specifically investigate the benefits of eating fish versus the risks of mercury poisoning (Am J Clin Nutr 2011(1);93:27-36). They made use of data collected in a larger study which included an initial 500,000+ people who responded to lifestyle and health questionnaires and donated blood samples for future study. For their research on mercury and omega-3 fatty acids, the scientists identified 431 people who had experienced a heart attack after joining the larger study. They then identified 499 people in the same sex, age group, date of responding to the questionnaire, and location of residence who had NOT experienced a heart attack. (This type of research is known as a "case-control study.")

The dietary records of those who had experienced a heart attack were compared with those who did not. They specifically looked at fish consumption along with alcohol consumption and the amounts of fruits and vegetables they ate. The donated blood samples were tested for the presence of mercury as well as the amounts of beneficial fatty acids.

Further, those who had higher amounts of beneficial fatty acids in their bloodstream also had the highest amounts of mercury in their blood. They were also the least likely to experience a heart attack.

This does not mean that mercury protects you from heart attack. The researchers theorize that the apparent contradiction between how much fish people said they ate and the fatty acids in their blood is due to simple error - the participants relied on their own memory of how much fish they typically ate. The results to focus on here are that those with the highest levels of fatty acids in their blood were the least likely to have a heart attack. Clearly the benefits of eating fish outweigh the risks.