Dieting? Spicy Foods May Help
People ask me this all the time: "Is it true that eating spicy foods raises your metabolism?" It sure seems like it ought to be true: when you eat spicy foods, you might feel warm and break out into a sweat, just as you would if you were exercising.

Satisfaction no longer an excuse
You've probably heard that you should eat slowly to give your body time to signal you when you're full. This is called "alimentary alliesthesia" (you don't need to remember it; there won't be a quiz). Another mechanism that helps your body control how much you eat is called "sensory-specific satiety". 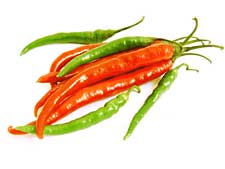 Irritable Bowel Syndrome (IBS) is characterized by chronic symptoms of abdominal pain, bloating, and constipation or diarrhea (or both). As many as 15% of people in the United States suffer from this disorder, which is treated both with medications and also with dietary adjustments. Gastroesophageal Reflux Disease (GERD) is defined as chronic symptoms of acid reflux from the stomach into the esophagus: heartburn is the most common symptom. It is also treated with medications and dietary adjustments.

A researcher in Thailand noted that most of the research on GERD and IBS focuses on a Western diet and wondered if two of the major features of the Thai diet - rice and spiciness - would have a positive impact on either disorder. In an article in the Journal of Neurogastroenterology and Motility (2010;16(2):131-138) he reviews the available research.

The carbohydrates in foods have to be broken down into mono-saccharides before they can be absorbed into the small bowel. If the food is not completely broken down, what is not absorbed moves into the colon and is fermented by the colonic bacteria into gas and fatty acids, which contribute to the symptoms of pain, bloating, and diarrhea in IBS. One small study of IBS patients gave both IBS patients and healthy controls a breath test for lactose intolerance. The IBS patients were more likely to develop physical symptoms of lactose intolerance than the healthy controls whose breath test was also positive. This suggests that the IBS patients' bowels are overly sensitive to the materials that aren't absorbed by the small bowel.

Rice, Dr. Gonlachanvit notes, is completely absorbed by the small bowel and therefore produces very little gas in the colon. One study showed that IBS patients experienced reduced symptoms on a rice-based diet, while their bodies produced far less hydrogen and methane than the normal controls.

Symptoms of IBS are sometimes successfully treated with a diet that excludes allergens. A study in China showed higher positive blood allergen reactions to several foods in those with IBS as compared to normal controls, but rice did not produce such reactions. IBS is also often treated with a lower-fiber diet to help reduce constipation symptoms, and compared to wheat or other sources of carbohydrates, rice has the lowest amount of fiber.

You may have heard that capsaicin, the ingredient in chilis responsible for its heat, has been used topically for those with arthritis. It works by desensitizing the pain receptors in the nerves. It might seem counter-intuitive, but it appears that the high levels of spicy foods in Asian countries may help with symptoms of GERD.

While those with GERD have higher numbers of the pain receptors specific to capsaicin in their esophagus or intestines, one double-blinded study showed that regular intake of capsaicin-containing chilis could, it appeared, desensitize the receptors in the gut and esophagus, leading to a decrease in GERD symptoms. Indeed, those countries with a prevalence of spicy foods, such as Thailand, Turkey or China reported much lower symptoms of heartburn with their GERD diagnosis - their major symptom of GERD is acid regurgitation.

It does appear that a diet based on rice as the major carbohydrate may be better for those with IBS than a diet based on wheat or corn. If you have IBS and have not tried an exclusion diet, talk with your doctor.

The average daily intake of chili in Asian countries is about 2.5 grams per day, while in the typical Western diet it's 0.05 grams per day. While the research cited here is interesting, I'm not suggesting that those with GERD should take up a high-capsaicin diet. It is, however, certainly a good avenue for further research.