Are there cheeses that will not cause a problem for my lactose intolerance?
We doctors have an expression about the effect of medications on the body: "dose dependent." By this we mean that people will sometimes not have side effects to a certain medication or substance until they consume more than a certain amount. The side effects are dependenton the dose.

Does cooking affect lactose?
Lactose is a sugar that is made up of two different sugar molecules. The disaccharide (di for two and saccharide for sugar) is made up of the two sugar molecules galactose and glucose. The bond that holds these two sugars together is broken by an enzyme called lactase. The reason that many folks are lactose intolerant is because their bodies don't make the enzyme lactase. 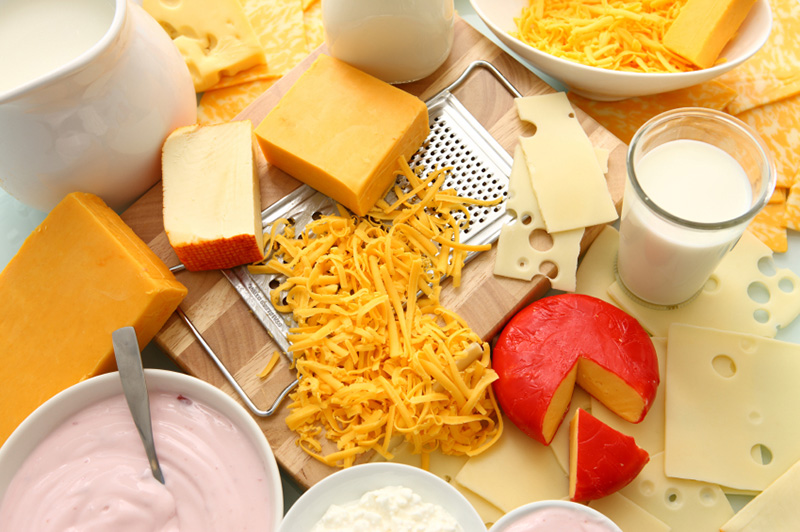 Chances are you know someone who is lactose intolerant. After all, about 20% of Caucasians, over 50% of Hispanic Americans, 75% of those of African descent, almost 80% of Native American Indians and 80% of Asians are lactose intolerant to some degree.

For most lactose-intolerant people, managing their condition often means avoiding dairy products altogether, even though most people can tolerate small amounts of lactose with no problem. As the amount of lactose consumed increases, however, the severity of symptoms usually increases. Researchers at the National Institute of Health noted this and decided to review the existing evidence to find out: first, what amount of lactose a lactose-intolerant person could consume on a daily basis without experiencing symptoms, and second, if any of the typical treatments could be said to work (Annals Int Med 2010;152(12):797-803).

They began by identifying those studies that had focused on lactose dosing and managing the symptoms of lactose intolerance. Of these, 26 studies compared the effects of lactose-reduced milk or milk supplements to the effects of regular milk, while 1 study compared milk alone to milk along with such lactase supplements Lactodigest, DairyEase or Lactaid. They concluded from these results that lactose is better tolerated in combination with other foods than when milk or lactose-containing foods are eaten alone.

Some of those who are lactose intolerant use probiotics in their yogurt to help reduce their symptoms. Typically these are strains of the bacteria Lactobacillus acidophilus which are added to the yogurt before eating. The 7 studies that were assessed were small and not well designed, leading the researchers to conclude that there was also not enough evidence to say whether the strategy worked.

Another strategy for improving one's tolerance for lactose is to eat increasing amounts of lactose over time: the reasoning is that the colon slowly adapts to the lactose. After evaluating two studies, the NIH researchers concluded that there wasn't enough evidence to support this strategy, either: these studies were also too small and did not do enough to eliminate the possibility that the participants were not experiencing a placebo effect (in this case, experiencing symptoms because they expected to have symptoms and not because they had actually consumed lactose).

It's obvious that more, larger, and better-designed studies are needed to assess the various treatments of lactose intolerance and how well (or if) they work. It seems clear, however, that most people can tolerate up to a cup of milk without symptoms as long as that milk is in combination with other foods. The take-home message: if you're lactose-intolerant, there's a good chance that you can enjoy dairy ingredients in your foods, including milk in baked products and butter in your sauces. Here's a list of common dairy foods and the amount of lactose they contain.