To help prevent diabetes, take... wine?
One of the interesting things about scientific research is that sometimes you start out to discover one thing and end up finding something else. Recently a group of scientists from the University of Minnesota set out to investigate whether a diet rich in flavonoids (an antioxidant found in fruits, vegetables, and beverages like tea or wine) might help reduce the risk of Type 2 diabetes (J Nutr 2006;136:3039-3045).

Being Careful with Alcohol
While we know that drinking can be beneficial, it can also cause many health issues. About 2 drinks a day on average for men and 1 per day for women has been shown to be favorable, but binge drinking can cause more health problems than balanced consumption.

Mediterranean Diet, lifestyle factors, and the elderly
Researchers in the Department of Dietetics at Harokopio University, in Athens, Greece, evaluated the combined effects of a Mediterranean Diet, alcohol consumption, physical activity, and other factors on the cholesterol levels of persons 65 and over (Lipids in Hlth and Dis 2005;4:17). 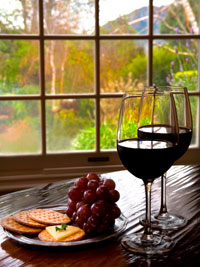 You're almost certainly aware by now that being overweight is just one of the risk factors for type 2 (non-insulin-dependent) diabetes. But you may not know that uncontrolled diabetes can lead to vision loss, kidney failure, amputations, heart problems, and sexual dysfunction - among other long-term effects.

Recently I wrote about a study that shows that diabetics who followed The Mediterranean Diet, instead of the low-fat diet recommended by the American Diabetic Association, were far less likely to need to take medication to control their diabetes. They could manage their diabetes better simply by watching what they eat!

Recently a group of researchers focused their attention on alcohol use and diabetes (Diabetes Care 2009;32(11):2123-2132). (Regular, moderate alcohol use is a part of the Mediterranean Diet.) They grouped together 20 published studies which included, altogether, over 477,000 people. They compared those who never drank alcohol with those who did drink alcohol - and grouped the drinkers by how much they drank in grams of alcohol per day.

You'll be hearing more about diabetes and the Mediterranean Diet in the coming months. This is just one study that supports the conclusion that the Mediterranean Diet is a diabetic diet. Here, we find that moderate alcohol use doesn't just help you avoid heart disease, it also helps you avoid diabetes. That said, it doesn't mean that you should start drinking if you don't want to, nor does it mean that you can have your entire week's worth of alcohol in one night. Regular, moderate consumption, such as a glass or two of wine with dinner, say, is clearly good for you.