Mediterranean Diet: Alcohol
I get questions from patients almost every day about whether it's safe or healthy for them drink alcohol. It goes without saying that drinking too much alcohol is bad for you. Even so, the best research we have now shows that those drinking between 2 and 3 drinks per day for men or 1 to 2 per day for women live longer and live healthier.

Alcohol is good for your heart
Studies have noted that moderate alcohol use is associated with a lower risk of heart attack in those persons with known cardiovascular disease or in higher risk populations. Yet no studies are focused specifically on alcohol use and whether it is by itself a protecting factor. Previous studies only look at alcohol intake as one of a combination of factors. (Arch Intern Med 2006;166:2145-2150)

Alcohol and Type 2 Diabetes
You're almost certainly aware by now that being overweight is just one of the risk factors for type 2 (non-insulin-dependent) diabetes. But you may not know that uncontrolled diabetes can lead to vision loss, kidney failure, amputations, heart problems, and sexual dysfunction - among other long-term effects.

Reading the academic research articles that we then write about here at Dr. Gourmet is not what I'd call reading for pleasure. They're interesting, of course, but a bit dry, as I'm sure our Health and Nutrition Bites are. Now and then, however, I do come across an article title that is so interesting that I just have to read it. Today's article is one such: "Effects of alcohol-free beer on lipid profile and parameters of oxidative stress and inflammation in elderly women" (Nutrition 2009:25; 182-187). 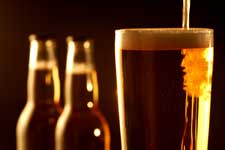 As it turns out, this is a really interesting study. I should first explain that "lipid profiles" refer to cholesterol levels. "Oxidative stress," in essence, is part of a complex inflammatory process that is the first step in a series of chemical interactions that lead to artherosclerosis. Those substances known as antioxidants act to stop these processes and are known to help prevent such inflammatory conditions as artherosclerosis.

The elderly women in question are 29 healthy nuns of normal weight between the ages of 58 and 73 who live in a convent in Spain. One of the reasons that they make such a good group to study is that they all follow the same diet and lifestyle and had never used postmenopausal hormone therapy. The researchers supplied the convent with enough beer to give the participants 45 days' worth of beer: 500 milliliters of beer per day per person, split into two portions per day, taken with daily meals. (This is equivalent to an 8-ounce glass of non-alcoholic beer twice per day for 45 days.)

The participants provided blood samples before and after the study period, and their blood was tested on both occasions for cholesterol levels and markers of oxidative stress. While the researchers had hoped that the nuns' cholesterol scores might improve, in truth their scores remained much the same, with the exception of those women with the very highest initial scores (reduced about 15 points on average). However, the measures of the amount of oxidative stress and inflammation in their bloodstream were reduced, while antioxidant levels were increased.

This group of nuns, no matter how amusing the title of the report might be, actually make a good sample group for dietary testing: they are all past menopause, are fairly close in age, and follow the same diet. Two drawbacks to this study include the small size of the study sample (only 29 people) and the fact that the study was partially funded by the Center for Beer & Health Information of the Beer Manufacturers' Association of Spain. Still, it appears that drinking non-alcoholic beer may act as an antioxidant and help prevent heart disease. This doesn't mean that you should go out and start drinking beer (alcoholic or non-alcoholic), but if you do drink non-alcoholic beer you can do so knowing that it may not be the waste of time that some beer drinkers might say it is.