Portion Size
In the last few decades [portion control] has become a major issue with portions in restaurants increasing dramatically. 40 years ago a 32 ounce milk shake with 1,160 calories would have been unusual. There was no such thing as a Quarter Pounder (let alone a Double Quarter Pounder) and getting a mountain of nachos would be rare. These huge plates have spilled over into how we choose food.

Visual Cues and Portion Control
In a study funded by pistachio growers, researchers at Eastern Illinois University theorized that seeing the proof of one's previous consumption (in the form of chicken bones, crab shells, multiple drink cups or food wrappers) might make people more aware of how much they had already eaten - leading to less intake overall (Appetite2011;57:418-420).

Lose Weight with Portion Control
Meal replacements have long been a popular way to lose weight. Metrecal was one of the first meal replacement drinks, introduced in the 1960's as a high protein powder that could be mixed with water and drunk in place of a regular meal. Slim-Fast in liquid form was introduced in the 70's, and was soon followed by sports drinks, protein bars, and all the pre-made meal plans you see today.

People's waistlines have increased right along with the increasing sizes of food servings in restaurants. Portion control, then, is just one of the tools advocated for successful weight loss. "A four-ounce serving is about the size of your palm," says the dietitian. Yet there's no actual research showing that portion control alone will help with weight loss. Enter researchers at the University of Calgary in Alberta, Canada, who devised a study to test that very assumption (Arch Intern Med 2007;167(12):1277-1283).

They used a nifty portion control tool called "The Diet Plate," which is a dinner plate decorated with outlines for appropriate servings of a dinner meal: carbohydrates, proteins, cheeses, sauces, and vegetables. "The Diet Plate" also comes with a cereal bowl with concentric rings painted around the inside, which indicate appropriate servings of various types of dry cereal. 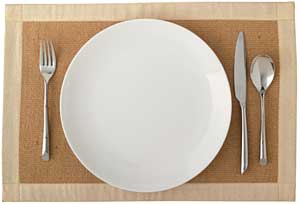 For the study, the scientists recruited 122 obese men and women. All had type 2 diabetes, but only 40% of the subjects were diabetics using insulin to manage their blood sugar. Approximately half of the test subjects were given a Diet Plate and cereal bowl and taught how to use them. They were told to use the cereal bowl whenever they ate cereal for breakfast, and to use the Diet Plate for their largest daily meal, when they ate at home. Subjects were also instructed not to eat more than usual at other times of the day. The other half of the test subjects acted as the control group: they received their usual care from their doctors and dietitians.

In the six months of the study, those using the calibrated plates and bowls lost "significantly more" weight than those who were in the control group. In fact, those who lost weight using the tools lost between 1.8% and 5.7% of their body weight - which is equivalent to a 300-pound man losing between 5.4 and 17.1 pounds (remember that all of the test subjects were clinically obese). These results are comparable to the results seen in studies of prescription weight loss medications.