Waist and Hip Measurements
There are some risks that you can’t change, like your family history or gender. Lifestyle issues like exercise and diet are the factors that you have the most control over, and one factor in understanding your risk is not just in what you weigh. One indirect measure that is used is the Body Mass Index. This calculation is widely used in research and has proven a fairly accurate predictor of risk for illness.

Watch Your Waist - Not Just Your Weight
When we talk about obesity it seems like we're most often talking about Body Mass Index (BMI). Certainly I've been doing a lot of talking and writing about it. There's another tool that doctors use to assess weight that I've talked about, just not quite as much: Waist-to-Hip Ratio (WHR).

Being Apple-Shaped and the Risk of Dementia 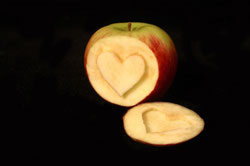 We know that being apple-shaped is more of a health risk than is being pear-shaped. Body fat that is centralized to the abdomen (being apple-shaped) is a strong risk factor for diabetes, heart disease, stroke, and death from all causes, just by itself. This remains true even when the individual in question has a normal Body Mass Index. Further, that abdominal fatness, as one symptom of the metabolic syndrome (a collection of five symptoms), has been linked to an increased risk of Alzheimer's (Bite, 01/10/07).

To find out, the researchers identified current members of Kaiser Permanente (a nonprofit group medical practice) who had been continuous members since between 1964 and 1973 and were between 40 and 45 years of age at that time. In that 9-year period all of the eligible patients were those whose blood pressure and cholesterol levels, height, weight, waist measurement, and thigh circumference measurement were taken as part of their routine medical care.

In 2006, the endpoint of the study, this meant a group of eligible patients of over 6500 men and women were still alive and still members of Kaiser Permanente, although they were now between 73 and 87 years of age. Over 1000 of the 6500 men and women had been diagnosed with dementia between 1994 and 2006. Their waist and thigh measurements were compared with those who were not diagnosed with dementia.

By contrast, those whose Body Mass Index was in the overweight or obese ranges, but who were pear-shaped, had their risk of dementia only increase by 80%.

This doesn't mean that being pear-shaped protects you from the long term consequences of obesity; it just means that your risks are not as high as those whose body fat is carried mainly in their belly. If you are apple-shaped, make an effort to reduce your risks by being of normal weight, following a healthy diet, and getting regular exercise.