How to Lose Belly Fat
...in an interview the other day I was specifically asked about a few of the more popular claims and whether the Mediterranean diet could deliver on any of these claims. The interviewer's focus was on "belly fat" and it's clear that people are concerned about it and are looking for a diet plan to help them with it. While I don't care for hype, the fact is that a Mediterranean diet offers many of the same benefits that fad diets make their claims about, but the Mediterranean diet has the distinction of being backed by solid research - and you get to eat great food. 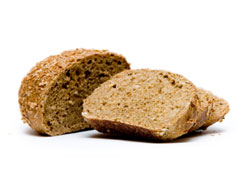 Studies have shown that those who eat more whole-grain foods tend to have a lower Body Mass Index and a lower risk of heart disease. The American Heart Association recommends that at least half of your daily servings of grains should come from whole grains, not just because of the increased fiber, but also because they contain more of various heart-protective compounds than refined grains. It is thought that the lower Body Mass Index associated with higher whole-grain intake is due to its higher fiber content, which makes the foods lower in calories and more satisfying. Until recently, however, few studies specifically looked at whether consuming more whole-grain foods would actually help with weight loss.

Researchers at Pennsylvania State University designed a study to assess exactly that (Am J Clin Nutr 2008;87(1):79-90). They recruited 25 men and 25 women who were all obese (Body Mass Index over 30) and had metabolic syndrome, which is a characteristic grouping of heart disease risk factors. Each subject was randomly assigned to one of two reduced-calorie diets, both overseen by dietitians.

Those assigned to the first group avoided whole grain foods and instead chose refined-grain options in their diet (we'll call them the refined-grain group). Those in the second group were given a target of 4, 5, 6, or 7 servings of whole grains per day (the whole-grain group). Both diets were designed to provide a daily caloric deficit of 500 calories per day for each subject, adjusted to each individual's needs.

After 12 weeks the researchers evaluated their subjects' weight loss and heart disease risk factors. They found that although both diets yielded about the same amount of weight loss and cholesterol level improvements overall, those on the whole-grain diet reduced their percentage of body fat in their abdomen significantly more than those on the refined-grain diet. Abdominal fat (being apple-shaped instead of pear-shaped) is known to be an indication of greater risk of heart disease. In addition, those in the whole-grain group reduced their blood levels of C-reactive Protein, another known risk factor, by 38% over those in the refined-grain group.

It seems clear that eating more whole grains will not necessarily help you lose more weight. What it will do is taste great, help keep you satisfied, and reduce your risk of heart disease in multiple ways. It's easy to get more whole grains in your diet: try choosing whole-wheat bread instead of white for your sandwiches (or for your pizza) and make brown rice instead of white as a side dish.