How much Omega-3 Fatty Acids should I be getting per day?
I eat a lot of Albacore tuna. The package says it contains 450 milligrams [of Omega 3 fatty acids] per 1/4 cup. Is this as good as salmon? How much should the daily intake be to be good for our health?

Not just any fish for omega-3 fatty acids
Previous studies on the relationship between fish consumption and the blood levels of omega-3 fatty acids have been focused mainly on those populations who eat fish frequently. Further, the fish these groups eat tended to be saltwater fish almost exclusively. Canadian researchers recently designed a study to cover those research gaps: their study focuses on those who only eat moderate amounts of fish and tend to eat more freshwater fish than saltwater fish (Am J Clin Nutr 2006; 84:1299-1307). 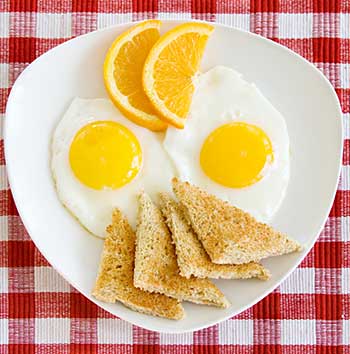 I've written numerous times about the benefits of omega-3 fatty acids and their positive impact on heart health. Among the best sources of omega-3 fatty acids are fatty fish like salmon and mackerel, and vegetable sources include flaxseed and canola oil. Now we might be able to add certain types of eggs to that list. In an intriguing study, researchers in the Seychelles and their colleagues in Switzerland tested the efficacy of omega-3 fatty acid-enriched chicken eggs on cholesterol scores in 25 healthy volunteers (Nut, Met & Card Dis 2007:17(4);280-287).

The feed of the chickens who laid the enriched eggs were fed chicken feed enriched with fish oil from pressed tuna caught in the Seychelles islands. (The Seychelles Marketing Board, which produces both the enriched as well as unenriched eggs, provided funding for the cholesterol analyses as well as a reward to those subjects who completed the study.) The yolks of these chickens then contained 0.24 grams of omega-3 fatty acids per egg, which is about what is contained in the average serving of fish.

The study was designed as a crossover study: the volunteers were randomly divided into two groups. For three weeks each group were given either an enriched egg or an unenriched egg as a snack five days out of the week. Then for an additional three weeks each group was given the other type of egg, five days per week. Neither the participants nor the scientists knew which group were receiving which type of egg until the study was completed. (This is known as a "double-blind" study.)

One interesting side note to this study was the observation that regardless of whether the subjects received the enriched eggs first or the unenriched eggs, their cholesterol levels appeared to increase slightly over the first three weeks of eating an egg five days per week, then returned to normal after the second three weeks.