Should I try colon cleansing?
My wife and I have been following The Dr. Gourmet Diet Plan for a few months now and love it. Now we are considering doing a detoxification/colon cleansing program. Do you have any recommendations regarding the many herbal products available? Are they safe? Could we get the same effect by just going vegetarian and boosting our fiber intake? Any advice you can provide is appreciated.

Yes, You Can Eat Red Meat (Just Not Every Day)
My patients are always saying that they can’t eat healthy because they like to eat red meat. Well, I like eating a good steak as much as the next person and I do. I don’t eat red meat that often - probably about 5 times a month or so. I do eat leaner cuts and Dr. Gourmet recipes reflect these healthier choices.

Is goat, venison or buffalo as bad for you as other red meats?
I understand the latest report on the problems that may follow a diet high in red meat consumption. I don't eat a lot of beef, but I wonder what goat meat, venison or buffalo are considered to be as far as "red" meats are concerned. Are they good substitutes for beef? No mention of them is made in any of the reports I read.

Getting the balance right 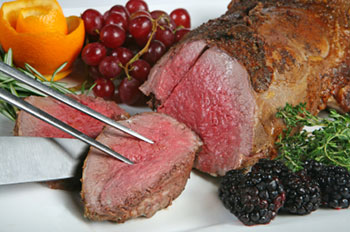 We've seen in previous studies that eating red meat has been linked to breast cancer in women (News Bite 11/15/06) as well as colon or rectal cancer (Dr. Tim Says... 01/09/06). Researchers at the University of North Carolina noted these results as well as those studies that link eating more fruits and vegetables with a reduced risk of these cancers (such as the News Bite from 05/23/06). Similarly, some dietary patterns, such as the Mediterranean Diet, appear to protect against colon and rectal cancers.

Dr. Austin and his colleagues theorized that the protective effects were a function of the ratio of fruits and vegetables to meat in an individual's diet, rather than being related to a specific amount of either food type in one's diet (J Nutr 2007;137(4):999-1004).

In order to test their hypothesis, they recruited 725 people who had a colonoscopy at the University of North Carolina hospitals between November 2001 and December 2002 who also agreed to participate in a telephone interview about their diet. They were between 30 and 80 years of age and had no history of colon cancer, inflammatory bowel disease, or colon removal. The telephone interview gathered information about their regular diet using a food frequency questionnaire that included 18 different food groups and over 120 specific food items.

The questionnaire results were then analyzed for both total amounts of various foods as well as for the relative amount of calories that food represented in an individual's diet. (For example, red meat intake for a specific person might be an average of 4 ounces per day but represent anything from 2% to 20% of the calories in a person's diet.)

Three general dietary patterns were identified using these relative amounts: "high fruit-low meat" included those who ate a lot of fruit as well as whole-grain products but with relative little meat. The "high-vegetable-moderate meat" group ate higher amounts of vegetables than fruits but a moderate amount of meat, while the "high meat" group ate a more typically American diet of below-average amounts of fruits, whole grains, and vegetables with an above average amount of meat and higher fat and sugar.

These dietary patterns were correlated with the specific subject's colonoscopy outcomes. In the "high fruit-low meat" group, only 18% of subjects had a cancerous polyp, as did 30% of those in the "high vegetable-moderate meat" group and 32% of of the "high meat" group. The researchers note that those in the "high meat" group tended to be men as well as those with more of a smoking history. That group also contained a higher proportion of those who drank 14 or more alcoholic drinks per week, all of which could have an effect on their risk of colon cancer.

This study supports what I've said many times: you can't go wrong on a diet high in fruits, vegetables, and whole grains with a moderate amount of lean meats and fish.