Weight Loss Myths (Part 3)
I hear a lot of patients say things about eating healthy and losing weight that are simply not true. For the next few weeks I am going to share some of these myths with you and the truth behind them.

Dieting? Spicy Foods May Help
People ask me this all the time: "Is it true that eating spicy foods raises your metabolism?" It sure seems like it ought to be true: when you eat spicy foods, you might feel warm and break out into a sweat, just as you would if you were exercising. Unfortunately, what research there is into the metabolic effects of eating capsaicin (the substance responsible for the spiciness in chilies) showed no effect on a person's resting metabolic rate. 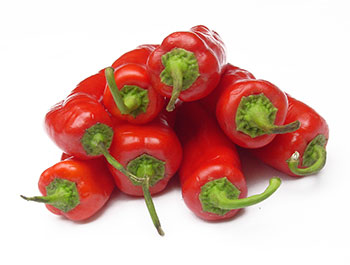 I reported last year on a study that evaluated the effect of eating chilies on blood sugar levels and metabolism (Hot research! 7/14/06). Unfortunately, that study's results suggested only that the amount of insulin needed to control a person's blood sugar might be decreased after eating a meal containing chilies, but that the amount of energy the person burned - their basal metabolism - was unaffected.

In a follow-up study reported in the European Journal of Clinical Nutrition (2007;61(3):326-333), 36 volunteers were randomly assigned to a bland or chili-containing diet, then after four weeks of following that diet, they switched to the opposite diet for a further four weeks. The chili-containing diet included the equivalent of 30mg per day of capsaicin, the active ingredient in chilies.

At the beginning of the study and then again at the end of each diet period (at four and eight weeks), the subjects' blood pressure was tested and their cholesterol scores were measured via blood test. In addition, their basal metabolic rate (the amount of energy an individual burns while at rest) was measured.

The results are disappointing. Even a regular diet of chilies, as opposed to a one-time meal as in last year's study, had no effect on an individual's metabolism. Interestingly, the scientists note that the male volunteers had a slightly lower resting heart rate after four weeks of the chili diet as compared to the bland diet. (A higher resting heart rate can be a risk factor for heart disease, especially in white men.)

This is a small study, but one that's fairly well designed, and it certainly appears that it puts paid to the idea that eating chilies will raise your metabolism. I still love spicy foods, though, and spicy foods like salsa are a great, low-calorie way to brighten up what might otherwise be boring food. Try some Pork Chops with Warm Tomatillo Salsa, Tenderloin with Harissa Sauce, or Tuna with Wasabi Pea Crust for a change of pace.