The Price Myth
I get a lot of questions during lectures from people wanting to know how they can eat better when it's so expensive. This is, quite simply, one of the last great myths of eating healthy - ranking right up there with the fallacy that eating healthy doesn't taste good. There's no doubt that it's just as easy and economical to cook a meal that's good for you than eat one that's not.

How to Eat Healthy at Fast Food Restaurants
Even though I travel a great deal, part of my success in avoiding mediocre food away from home is the same as when I am at home - planning! I am writing this on an airplane today and my lunch was carryon from home. I simply made my sandwich this morning as I usually do. Fast food restaurants are now very expensive and not only did I save money, I had a much better meal: it both tasted better and was better for me.

Effects of a high fat meal go beyond weight gain 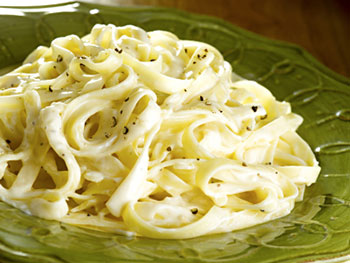 I have written previously about the immediate effects that a high fat meal can have on the body (Good fats protect your arteries, 8/11/06). There have been a number of studies showing how much effect a meal that is high in saturated fat can have on everything from inflammatory markers to blood pressure. Fabkjana Jakulj and her colleagues at the University of Calgary reported on their research into this in the April issue of the Journal of Nutrition (J Nutr 2007;137(4):935-939).

I particularly like the design of this study. The researchers fed one of two meals to 30 healthy undergraduate students. The high fat meal consisted of a McDonald's breakfast including a Sausage McMuffin, Egg McMuffin and 2 hash brown patties (820 cal., 42 g fat, 17 g sat. fat and 270 mg cholesterol). (I feel kind of ill just writing about that breakfast.)

The low fat meal had the same number of calories and was made up of a bowl of Kellog's Frosted Flakes, skim milk, fat-free yogurt, Kellog's Fruit Loops bar and a Sunny Delight orange juice (830 cal., 1 g fat, 15 mg cholesterol). (Not much better on the decent breakfast scale.)

The participants had fasted for ten hours and then were told to not eat for two more hours after breakfast. At that point a number of stress tests were performed. These included such tasks as mental arithmetic, public speaking and immersing their hands in ice water. Such tasks are used in research to mimic stresses that cause the body to react with higher heart rates, elevated blood pressures and such. A second testing session was performed a week later and those who had randomly been assigned to eat the high fat meal ate the low fat version and vice versa. In this way all participants were able to be tested on each meal type.

The results were pretty clear cut. The high fat meal resulted in significantly higher blood pressures. Another criteria the Total Peripheral Resistance (TPR) was also calculated and found to be elevated. This is one measurement that is considered an indication of cardiac reactivity. It is the idea that such overactive cardiac activity may be a possible mechanism for development of hypertension and heart disease. The stress testing did not have a significant effect on heart rate or the amount of blood pumped by the heart.

First, let me say that both of these breakfasts are pretty awful. Beyond the idea that eating over 800 calories for breakfast is something only very active people would want to do the food is not the type that goes into a healthy diet (except for the dairy products). I would have loved to see this research done with a third diet made up of great food. It would have been interesting to see if better tasting high quality foods had a positive effect on blood pressure and TPR. A meal with high fiber, low saturated fat dishes like healthy muffins, egg dishes, oatmeal, fruits, juices, yogurt or cheese should have been included. There are so many great recipes and foods that it's pretty easy to eat healthy and eat well.

That said, this is another piece of research that supports eating high fat meals has more of an effect than simply packing on the pounds. It does appear that the high fat load causes both acute and long term effects on the body.