Weight Gain and Muscle DNA Damage
I have written in columns before about the benefits of calorie restricted diets. Numerous research studies have explored the role of weight in a variety of factors from inflammation to cancer. In an effort to further clarify the role of weight gain on the body a group at the University of Chile evaluated muscle tissue taken from volunteers during abdominal hernia surgery.

More on Eating Less...
I have written in this column on more than one occasion about the positive effects of calorie restriction on health. I find the idea interesting because one of the goals of Dr. Gourmet is to help you reduce through creative changes in recipes as well as portion control. 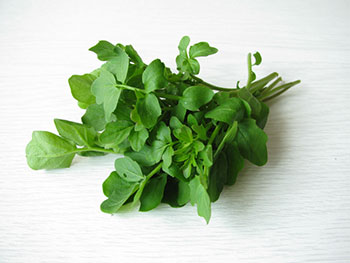 We know that eating more fruits and vegetables can help reduce your risk of cancer. In particular, cruciferous vegetables such as cauliflower, Brussels sprouts, watercress, and mustard greens, have been linked with a reduced risk of cancer. These vegetables contain a higher amount of a substance known as glucosinolates, which are known to be anti-carcinogenic. Watercress has the highest concentration of these substances, as well as high amounts of beta-carotene.

Given these links, researchers in the United Kingdom designed a study (Am J Clin Nutr 2007;85(2):504-10) to see if watercress intake could be directly linked to blood markers of cancer risk, which include low blood levels of antioxidants (such as beta-carotene), and DNA damage to cells. They recruited 60 otherwise healthy men and women between the ages of 19 and 55 years to participate in the study. Half of each group of men and women smoked between 15 and 25 cigarettes per day. The 60 subjects were divided into two groups that contained equal numbers of men and women and equal numbers of smokers and nonsmokers.

Each subject's blood was tested at the beginning and ending of each phase of the study to test for DNA damage, blood levels of carotenoids, and other markers of cellular damage that can lead to cancer. They found that the watercress supplementation led to decreases in DNA damage by up to 23.9%, and that levels of beta-carotene were increased by one-third. Interestingly, the effects of watercress consumption were stronger in those who smoked.