Kids also eat more while watching TV
I wrote not long ago about how distractions such as music during a meal will contribute to adults eating more than they would without music on (News Bite, 11/07/06), and you've probably heard the estimates that children consume about 25% of their daily meals in front of the television. Recently, scientists at the University of Buffalo devised a pair of experiments to see if television viewing affected the amount children ate.

How much television do your kids watch? 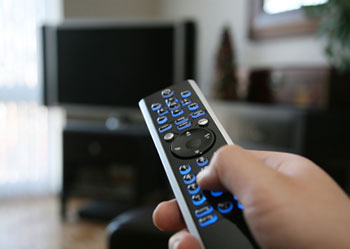 A recent study from the University of Missouri followed 8,000 children from kindergarten through third grade (J Am Diet Assoc 2007;107(1):53-61). The children were participants in the Early Childhood Longitudinal Study - Kindergarten Cohort, a sample of children from schools nationwide who entered kindergarten in 1989. About 48% were boys, 52% girls.

The participating children were weighed and their height measured on four occasions: Kindergarten fall and spring, first-grade spring, and third-grade spring. They were classified as overweight if their weight exceeded the 95th percentile for their height. Meanwhile, their parents were interviewed at the same periods, answering questions about their child's amount of television viewing, how often the family ate meals together, how much exercise the child got per week, and how the parents felt about their neighborhood's safety for outside play.

Interestingly, the amount of opportunities for exercise and the parents' perception of their neighborhood's safety had no effect on children's risk of overweight.

We know that childhood and adolescent overweight tends to mean overweight and obese adults. Current guidelines suggest no more than 2 hours of screen time (either television, videos, or video games) per night. Plus, kids who eat meals with their family tend to have healthier diets. Try one of these kid-friendly recipes today: Creamy Mac 'n' Cheese, Oven Fried Chicken, or Pepperoni Pizza.