Not just any fish for omega-3 fatty acids
Previous studies on the relationship between fish consumption and the blood levels of omega-3 fatty acids have been focused mainly on those populations who eat fish frequently. Further, the fish these groups eat tended to be saltwater fish almost exclusively. Canadian researchers recently designed a study to cover those research gaps: their study focuses on those who only eat moderate amounts of fish and tend to eat more freshwater fish than saltwater fish.

Are you eating the right kind of fish for your cholesterol scores? 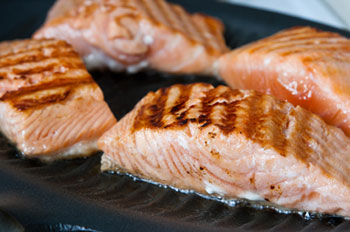 I've written extensively about the omega-3 fatty acids in fish and their impact on heart health (News Bites: 1/9/07, 11/17/06, 10/24/06, 9/26/06). Similarly, certain plant sterols (unsaturated fatty acids found in plants) can also have a positive impact on your risk of cardiovascular disease. Is there a combination of the right types of plant sterols and types of fish that will yield the most protective results?

Researchers in the United Kingdom (Nutrition 2006;22:1012-1024) recruited 134 men and women between the ages of 35 and 65 whose Body Mass Index was between 25 and 40 (overweight to obese), but otherwise healthy, to participate in a study comprised of a control group and four intervention groups. All groups had their height and weight measured, as well as their blood drawn at 12-week intervals throughout the 24-week study to check their cholesterol scores, particularly their triglycerides.

The control group continued to eat their normal diet throughout the study. The intervention groups received two servings of oily fish (such as salmon or mackerel) or white fish (cod, tuna, or shrimp) per week, along with cooking oils and spreads made of either sunflower oil or rapeseed oil. The subjects completed dietary records on a regular basis to track their intake of the intervention foods. All groups contained about equal numbers of men vs. women and similar BMI levels.

This study adds to what we already know: Consuming two servings per week of oily fish such as salmon or mackerel - not just any fish - is good for you. Here's more information about salmon, along with some salmon recipes.