Yes, You Can Eat Red Meat (Just Not Every Day)
My patients are always saying that they can’t eat healthy because they like to eat red meat. Well, I like eating a good steak as much as the next person and I do. I don’t eat red meat that often - probably about 5 times a month or so. I do eat leaner cuts and Dr. Gourmet recipes reflect these healthier choices.

Is goat, venison or buffalo as bad for you as other red meats?
For purposes of the research that has been reported on in the news recently, the studies include all types of red meats, including beef and products made from beef or pork such as salami or sausage. There is no specific mention of wild meat consumption in the research, however.

Is buffalo better for you than other red meats?
I love bison (which is American buffalo) and do purchase it occasionally instead of beef. There's somewhat better chance that the bison will be grass fed and there is good research that says grass fed beef (both cattle and bison) are higher in Omega 3 fats. It is lower in saturated fat but not that much lower than similar cuts of beef (according to the USDA). It is, however, higher in saturated fat than pork tenderloin or chicken breast.

Red meat still not bad for you 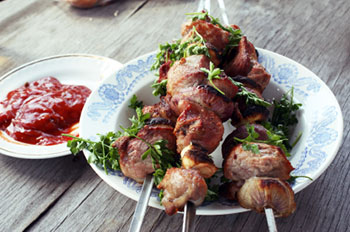 Older studies have linked eating more red meat with a higher risk of heart disease and type 2 diabetes. But is it the red meat itself, the higher saturated fat that's associated with red meat, or something else? Other studies have suggested that the culprit might be increased inflammation due to a higher level of blood iron. On the other hand, for those who have normal iron levels, changing the amount of red meat intake has been shown to have little effect on blood iron levels.

Researchers in Australia designed a study to test the effects of red meat intake on blood markers of inflammation (J Nutr 2007; 137:363-367). They recruited 60 men and women, non-smokers, otherwise healthy but with elevated blood pressure. Half were randomly selected to continue with their normal diet as the control group, while the other half were supplied with 215 grams (about 7.5 ounces) of lean red meat per day for the duration of the 5-week study. They were instructed to replace high-carbohydrate foods such as rice, pasta, potatoes, and cereals with the lean red meat in their daily diet.

All study participants had blood tests at the beginning and end of the study to assess the inflammation markers in their bloodstream. Their height and weight were also measured. A dietitian monitored their diet, exercise levels, and general health with regular meetings.

At the end of the study, the researchers found no indication of increased inflammation markers in the study group. Indeed, some markers were actually decreased. Similarly, their iron levels were also largely unaffected. Even more interestingly, the study group's Body Mass Index did not change, either - they did not lose weight by replacing carbohydrates with lean red meat.

It's important to remember that the results of this study are based on lean red meat. Higher markers of inflammation could still be related to higher intake of saturated fats or to other factors related to iron intake. In the mean time, enjoy your red meat well-trimmed and not more than once a week.